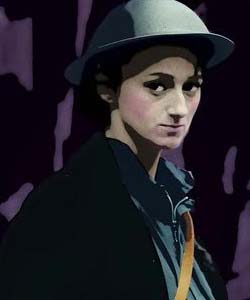 Sarah Walters’ The Night Watch is adapted by Hattie Naylor, and even though there are moments when the narrative catches fire, reeling you into this tale of infidelity, loss and forbidden love in 1940’s London – the result is strangely flat and uninvolving.

The characters of Kay (Jodie McNee), Julia (Lucy Briggs-Owen) and Helen (Kelly Hotten) are connected, not simply because of their sexuality, but because of secrets, lies and scandals. About half way through the first act, you are reminded of Michael Cunningham’s The Hours – as you do find yourself keen to find out the exact link between these disparate women, and their needs and desires.

Jodie McNee acts as the glue that binds the piece together, and her boyish Kay Langrish is at times confident, but at others – lost and longing to be loved. Her performance is very convincing but her character does spend much of the first act walking round and round the circular set, which instead of providing enigma leaves you feeling as frustrated as she is.

Lucy Briggs-Owen is remarkable, as she conveys a genuinely contemporary feel to her character, who even though, she is living in the shadows, does not require your pity or sorrow, as she is living her life. Kelly Hotten does well as Helen, but her character is mildly irritating but it is not her fault, the lack of a big supporting cast means that you do not get a sense of what society thinks about these women.

So, you keep hearing  their thoughts and opinions, which is fine in a book, but for a play about living your life in secret, it lacks the passion of Todd Haynes’ Carol; the unbridled moments, whereby a character forgets where they are and stops living via a code of silence. It all feels a bit BBC2 at 9pm; safe and stilted. The source material has a great deal to say, but despite good performances and a good sense of the era, and great sound effects, something is missing.

Worth a watch, as there are not many plays performed at big venues such as this one, about gay women. But, at the same time – you want more than a feeling of ‘Is That It?’ I would stick to watching Carol or The Hours on DVD, if you want genuinely defined representation.

The Night Watch is at the Royal Exchange Theatre until 18 June. To book.