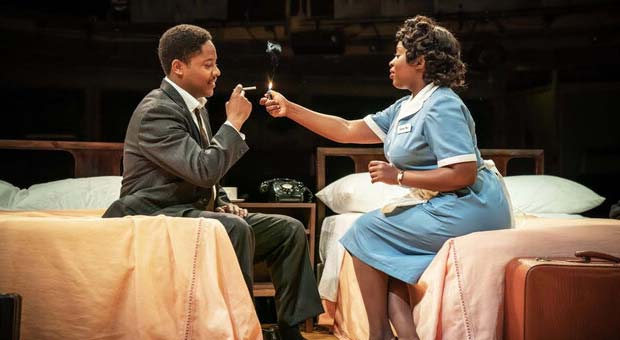 Manchester's Royal Exchange Theatre Company aims to transform the way people see theatre, each other and the world around them. It produces new theatre in-the-round, in communities, on the road and online and endeavours to bring brand new drama to trade ideas and experiences with the people of Greater Manchester (and beyond).With this in mind, joint artistic director of the Royal Exchange, Roy Alexander Weise, makes hisExchange DebutwithKatori Hall’smajestic award-winning play, The Mountain Top, and he certainly meets this mission.

It's 3 April 1968; the height of America’s Civil Rights Movement. In Room 306 of the Lorraine Motel, Memphis, Tennessee, after giving what was his final galvanising speech, Dr. Martin Luther King Jr is forced to confront himself as his hopes and dreams are picked apart by Camae, a young, attractive, foul-mouthed maid who brings him a cup of coffee, with a dollop of whiskey in it, on a tray of unflinching honesty. It’s a deceptively simple premise of two people in a motel room,

Powerful, insightful and wickedly funny, Katori Hall’s Olivier Award-winning play remains ‘forever present and urgent’ for director Roy Alexander Weise as race and class, gender and politics, leadership and responsibility are placed unapologetically under the lens. This production has its hard hitting moments, and as Ntombizodwa Ndlovu as Camae and TomiwaEdun as Dr. King discuss racist abuse, protest and progress, it’s impossible not to think of the advancements brought about the likes of President Barak Obamabut also sadly the 2020 killings of George Floyd and Breonna Taylor, and the Black Lives Matter movement.

This production needs actors, such as Ntombizodwa Ndlovu and TomiwaEdun, to bring the rich qualities to life. They do not disappoint. They bring an intense flavour, but addwonder and hope to this production, especiallyas they reveal this play is far more than at first appears.

As the reception this production received, in 2021, as we wrestle with so much uncertainty, this stunning play is perhaps more revelatory than ever before. The Mountain Top runs from 25 September – 27 October.