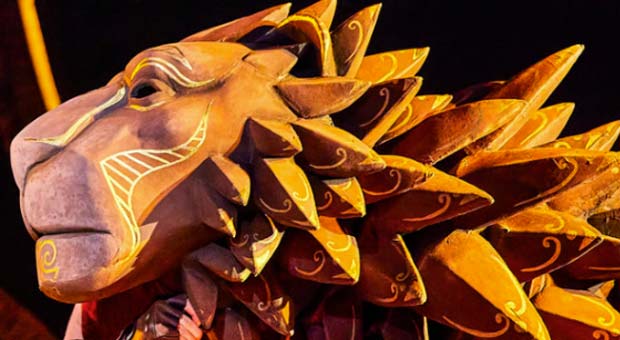 The Lion, the Witch and the Wardrobe

Who is panning for winter? If this is you then carry on reading and prepare to be enchanted as the well-known tale of “The Lion, The Witch and the Wardrobe” show has landed atThe Lowry for the holidayseason.

This classic productionstarted at the Leeds Playhouse in 2017 and is a presented by director Michael Fentiman with a combination of idioms including music, dance and puppetry.The result is truly spectacular, providing a true winters story, for audiences of all ages.

There are moments reminiscent of shows like “War Horse” and “The Curious Incident of the Dog in the Night-Time” especially at the beginning as the locomotive carrying the evacuee children is portrayed through an inventive use of puppetry and the cast become props and move about the stage in such a mesmerising fashion.

The story centres around the four Pevensiechildren Peter, (AnnarDuffus), Edmund (ShakaKalokoh), Susan (Robyn Sinclair), and Lucy (Karise Yansen). Theseare perfectly cast and although older, they capture the childlike qualities required to produce a quartet of convincing siblings. The whole cast complement the enchantment and with the comic moments bought to us by Mr and Mrs Beaver (Sam Buttery and Christina Tedders) there is something here for everyone as we navigate the enchanted world of Narnia.

From the beginning, the musicians are visible on stage, complementing the cast with their instruments andthis adds to the whimsical, charming and spectacular nature of this production and with a stunning multi levelled set and inventive use of costume design, all created by Tom Paris, there is very little to dislike in this production. The creativity and imagination conjured up is very exciting and what is particularly spectacular is the closeof the first act as the White Witch, played by Samantha Womack,rises to the roof in a climax of song, light and costumewith scenes very reminiscent of the West End smash Wicked.Womackisperfectly cast as the White Witch as she graces the stage with a terrifying, yet sublime nature and her power is very believable as she holds onto to winter.

The second half does feel a little rushed in places and this reduces the impact of Aslan (Chris Jarad) but with this being a family show, length of production must be a consideration especially for younger patrons. A word of warning, as some moments, particularly in the second half,may scare younger viewers, but other moments leave you gasping in awe as time and movement between the two worlds is created.

“The Lion, The Witch and The Wardrobe” is running at the Lowry until January 15, 2022 and is recommended for ages 6+.

Tix are via here