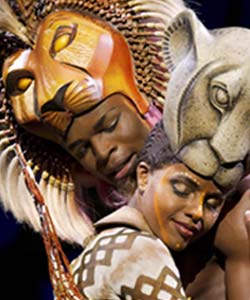 A star studded audience braved the miserable wet Manchester weather on Thursday night to attend the opening evening of The Lion King at the Palace.  Having attended the pre-launch ‘taster event’ earlier in the year we thought we knew what we were in for.. we were wrong & even more impressed than we could have imagined!

As the curtains opened the miserable dark Manchester weather became a distant memory and we were catapulted into the warm and vibrant African Savannah, becoming part of Simba’s story.

The Disney Theatrical Group producer and president, Thomas Schumacher, wanted an original, brilliant idea for staging the animated film. Thomas approached Julie Taymor, known for her work in avant-garde theatre, and she went on to design and direct the work of art that we see today on stage.  It was a mammoth task taking a cartoon style film, with a full cast of animals, to the stage!  Taymor had an ingenious idea and created a ‘double event’ whereby the audience sees the characters as animal and human at the same time.

The result is a lavish, dazzling Disney spectacle, layered with integral use of costume, masks, puppets and scenery. The antelopes, elephants and giraffes are amazing to watch as they gracefully move across the Savannah and the hyenas recreate all of the character that they had in the film.

The music is a journey in itself with songs from the Elton John/Tim Rice collaboration for the film soundtrack; Circle of Life, Can you Feel the Love Tonight etc, combined with tribal rhythms and hauntingly beautiful African songs by Lebo M, once a teenage singer in Soweto, now a GRAMMY Award winner.

The show really does captivate everyone; the audience was diverse with the young and old.  The sights, sounds and humor offer something for us all to take home from the story.
Humor plays a big part cutting through some of the sadness,  Zazu the Glaswegian bird, the baddie Scar and the warthog Pumbaa have the audience giggling away with their wise-crack jokes!
So enough about the characters, what about the cast…

Adult Simba played by South African Nicholas Nkuna easily matches his capital counterpart.
Carole Stennett (who played the role in the West End too) is a beautiful Nala, with the voice of an angle when she sings Shadowland . Young Simba and Nala are engaging and incredibly cute.

John Hasler and Mark Roper are like little and large in their meerkat and warthog costumes and Stephen Carlile as Scar takes baddies to a new dimension.

Gugwana Dlamini, who plays the part of Rafiki, demonstrated her theatrical skill as she clicks away hilariously in Xhosa (one of just six different African languages heard) and brought the house down with her performance of He Lives In You.

Do not miss out on the opportunity to experience this show in Manchester and do not expect anything less than an absolutely top class experience.

For details of the run and to book..Click here.