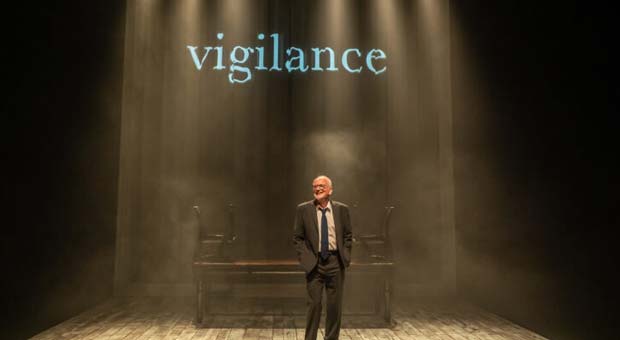 The Lemon Table at Home Mcr

We reviewed Premiere night for this adaptation of 2 short stories by Julian Barnes, directed by Michael Grandage and starring Ian McDiarmid, who have a long history together of creative collaboration.

This play is in two parts with no break, one person on stage each time, two men each reflecting on aspects of their lives and considering mortality and relationships from all angles.

First man is a committed concertgoer and music lover who is driven to distraction by others’ irritating behaviours during performances ( some nervous laughter from the audience present ) and his obsession drives him to behave in certain ways to curtail this.

He muses about his experiences, past mistakes and his relationship with the man he lives with. He is at once a figure of fun, theatrically outraged and pompous, yet also lonely and regretful.

The second man is the composer of the piece, nearing the end of his life and looking back over his enormous success and veneration whilst also contemplating his mortality.

Ian McDiarmid plays both men, brittle, arch and vital in the role of concertgoer and powerfully melancholy and contemplative in the role of composer. The intensity of the silences with gesture and movement at times were incredibly emotional. A masterful performance.

We were also treated to a very simple stage setting composing of a large table and 2 chairs either side, coupled with some very atmospheric lighting/effects.

This performance is around 70 mins of powerful, vital performance with a totally rapt audience and was most enjoyable indeed.