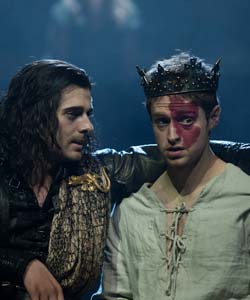 The James at The Lowry

April 23rd 2016 (St. George’s Day and a celebration of 400 years of William Shakespeare) was a fitting day to experience Rona Munro’s The James Plays. Presented by the National Theatre of Scotland, Edinburgh International Festival and the National Theatre of Great Britain, this is a modern day historical trilogy of Shakespearian proportions. The three plays, performed within a stark semi-circular set dominated by a giant sword plunged into the stage take us through the relatively unknown history of three generations of Scottish kings.

James I: The Key Will Keep the Lock

James I (Steven Miller) ascended in 1424 aged 29, following an exile of 18 years as a prisoner of the English crown. A dying, snarling Henry V sends him back to Scotland to take up his destiny. James, a mild-mannered poet, has to toughen up quickly to prove his leadership and deal with the resentful nobility nipping at his heels. Play one has a light touch with song and humour, and ends with James at the height of his reign.

James II: Day of the Innocents

James II (Andrew Rothney) is a far darker interpretation – a visualisation of the king’s psychological nightmares. Having lost his father aged six, young James, with his disfiguring facial birthmark, takes on the crown and spends much of his time hiding in caskets. A prisoner and pawn this time of the Scottish lords, when he ascends he must, like his father before him, work out what kind of King he will be and how to hold onto power. The main thrust is the childhood friendship turned rivalry between James and the ambitious young Douglas.

Whilst James III (Matthew Pidgeon) was also a child when he took the throne, the final part of the trilogy focusses on the latter part of his reign. Playing out in a hippy-esque world of frivolity and free love, James prefers his wine-tasting over the business of parliament, and commissions a choir to follow him around. The new era is signalled by modern costuming, high heels and a Gaelic sing-along; imagery that ensures the moment of James IV taking on the chains of power is brutally stark at the end.

Whether you were part of the auditorium audience or the onstage amphitheatre of onlookers this 9 hour theatrical experience flew by. This is a thrilling, faultless production of the highest quality absolutely deserved of its ultimate standing ovation.