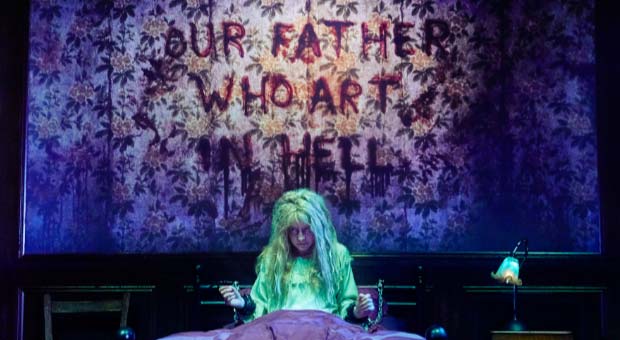 An iconic 1970’s film, The Exorcist chilled its audiences with the story of a demonic possession of a 12-year-old girl and her mother’s attempts to save her through exorcism. There were reports of people fainting, vomiting and having heart attacks during cinema showings; the film was even banned from being shown in some areas. The original novel has now been adapted for the stage by John Pielmeier, darkly directed by Sean Mathias. There are some classic moments in the film – can these be replicated on stage in a live theatre show?

The opening blackout gets the hairs tingling and sets the scene for many moments of nervous anticipation. However, the difficulty with The Exorcist is the plot, or lack of it: young girl gets possessed; gets exorcised; the end. That’s it. The film relied on its scare factor, and this stage version does the same.

There are some clever scenes (created by illusionist Ben Hart) involving ghostly writing, levitation and a spinning head. Regan (hauntingly played by Susannah Edgley) is drawn in by the charismatic voice of Sir Ian McKellen as the Demon, who forces her to urinate on her uncle and do things she shouldn’t with a crucifix, but despite an impressive cast of TV names (Paul Nicholas, Sophie Ward, Ben Caplan) the dialogue feels slow and leaves you just waiting for the next effect.

William Peter Blatty’s novel became a best-seller; the film petrified its audiences; this live production, despite a thin plot, will leave you clinging to your seat with genuine moments of terror.