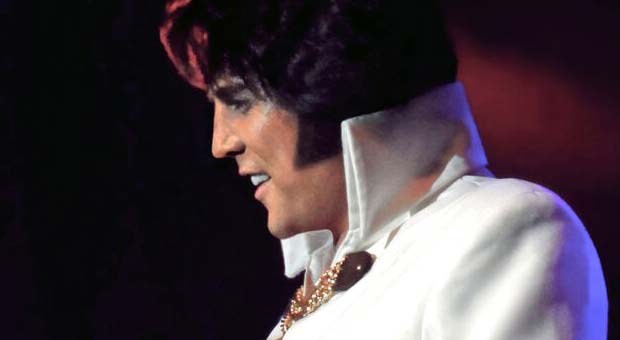 The World’s Greatest Elvis tribute show came to MANCHESTER ARENA and we were there to review for you.

Dean Z opened the show & his likeness to Elvis was uncanny with the most amazing voice to match !

Easy on the eye too wearing a black shirt, black slightly cropped trousers and the most gorgeous gold lame jacket with a diamante collar.

Elvis WAS in the building !

He teased the audience with his gyrating moves & inviting them up for kisses resulting in a queue of about 30 eager ladies...and gents which warmed up the audience nicely.

Deans set consisted of mainly songs from the rock and roll era and a few from the films. He had the audience dancing in the aisles.

He later changed into the 1968 Come Back Special leather suit much to the ladies approval & worked his way round the audience.

He finished with a rousing 'If I can Dream' which is a must for any Elvis gig & he dedicated it to the wonderful people of Manchester referring to the sad anniversary we had this week.

The second half started with what I call the Elvis space theme tune 'Sprach Zarathustra' and then Shawn Klush appeared, an imposing figure wearing the most amazing white catsuit embellished with gold embroidery and cape to match...trimmed with a cheeky leopard print.

Elvis again was back in the room !

Shawns set covered the Las Vegas years, his mannerisms were spot on & his voice was impeccable.

Again more ladies crowded the front of the stage & reaching out for scarves mopped with 'Elvis's' brow till security had to send them back to their seats.

He sang the usual favourites & the highlight for me had to be American Trilogy & sadly before we knew it Elvis had left the building !

All in all it was a great night and good fun, Dean & Shawn were perfect as were the band and backing singers The Passionettes, the only downside for me was the screeching woman next to me that took to whooping extremely loudly at the most impromptu times, slightly deaf in one ear now ...but she is one of my best friends so I have to forgive her lol.

If you never got to see the real Elvis and most of us haven't this is the next best thing :)