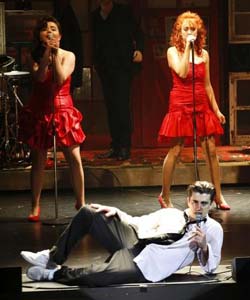 The Commitments at Palace Theatre

Roddy Doyle’s The Commitments has made it to screen with Alan Parker’s brilliant film version, and now hits the stage, following a hugely successful West End run.Compared with many musicals that tour the bigger venues, this is a relatively small show. The cast multi-task, carrying items on and off stage and it feels similar in tone to another film to stage musical with an Irish flavour, Once.

With Mrs Brown’s Boys wowing the over 40’s, some of the less subtle humour plays well to a big crowd. But, during the musical sections, The Commitments is on fire, as each member of this talented cast is, pardon the pun – committed to the material and you believe that they are a hastily put-together band.

Brian Gilligan has soul to burn, as the arrogant but supremely talented Deco, lead singer of the band. He also has a great way with the audience, inviting them to move, clap and cheer, involving you at every turn. Andrew Linnie’s Jimmy is front and centre as the brainchild behind the band, Jimmy Rabbit and Kevin Kennedy has fun as his da.

Amy Penston is in fine voice, complete with Deidre Barlow glasses, as Natalie and she is joined and backed by two equally superb singers, Leah Penston (Imelda) and Christine Tedders (Bernie) and this trio bring the likes of You Keep Me Hangin’ On and Chain of Fools to the stalls and beyond.

If there is one flaw, it’s that at times in the beginning of the show, the songs are too rushed. So much so, that if you are unfamiliar with the film, you may wonder what is happening within the narrative. If you know Alan Parker’s much loved movie, then you will feel at home with the some of the classic songs, featuring back biting within the performances, and the idea that we can all dream big for a moment.

Jamie Lloyd’s efficient direction means that the show can breathe in act two, so you do begin to connect with characters and feel their plight. And the big numbers saved for the encore do blow the roof off. And, yes – Try A Little Tenderness is a case of save the best till last, and it is bloody brilliant.

The book may be slim, but the meat is in these brilliant songs, and the tremendous cast, bring soul to Manchester and you’ll end up feeling as Proud as Mary and on your feet, demanding more.

The Commitments is at the Palace Theatre until 8 April.