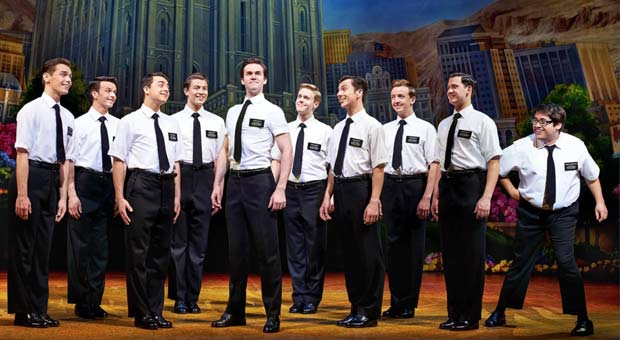 The Book of Mormon

The Mormons have returned to Manchester!

I saw the show Thursday and it has taken me time to get my review out for Book of Mormon as I needed to process it and really formulate what I was going to say. The show is written by the same writers as South Park so it shouldn't come as a surprise that BofM is close to the bone. If you go into the show expecting PC entertainment that’s incredibly naive.

The show is full of racial stereotypes, AIDS jokes, jokes about African poverty and of course a lot of mockery of Mormonism. The Mormon Church is famous for their missions to convert the masses. The Mormons are portrayed as idealistic saviors who will bring wisdom to those unaware of the word. Of course the reality is that Mormons deliver nothing and help no one. By the end of the story the people still have nothing.

The main characters of Elders Cunningham and Elder Price are well acted and they certainly elicit laughs but they’re also deeply unlikeable. It’s evident they care nothing for the people they come into contact with and are totally agenda driven which is fitting for what their Church does. It’s worth remembering it was the Mormon Church who donated money into fighting gay marriage in California in 2008.

As an LGBT reviewer I find it a bit of a tough one. Is it right for me to recommend this show? It’s well acted, it has high production values but the themes are problematic. I have a very dark sense of humour, stick on an episode of South Park or Come Fly with Me and I lap it up.

As I mentioned above the show is full of close to the bone jokes. I reconcile it by the fact that it takes aim at absolutely everyone. There’s some quite crass jokes about a gay Hitler in Mormon Hell which I’m sure will cause upset. I’m personally not offended but I can understand why some might be. If you choose to see the Mormons whilst they’re in town I would proceed with caution, you may find yourself hurt and offended.

For more detail and to book.