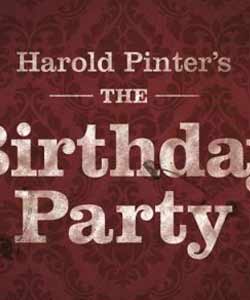 Harold Pinter tends to be one of those playwrights that people love or hate and his play The Birthday Party can, easily, divide them. Your Canal Street Correspondent knew, for sure, that his visit to the Exchange Theatre on Monday would provoke, in him, a reaction.
Set in the 1950's, the play is a dark comedy about Stanley Webber, an erstwhile piano player in his 30s.  Stanley lives in a shabby boarding house, which is run by Meg and Petey Boles, in an English seaside town. Two sinister strangers arrive. These characters, Goldberg and McCann, are, supposedly, there for Stanley’s birthday. They appear to have come looking for him and proceed to turn Stanley's apparently innocuous birthday party, organized by Meg, into a nightmare.  From this point, the plot becomes more and more obscure and unsettling whilst powerfully menacing.

At many points, amusing but at others very deeply disturbing, the principal characters Petey, Meg and Stanley, were based on a real encounter that Pinter had whilst appearing in rep. in Eastbourne. The sinister Goldberg and McCann emanate from the Pinter’s imagination. The question is, who, exactly  (or what) are they; policemen, secret agents, priests, gangsters?
Director Blanche McIntyre has stuck faithfully to Pinter's original concept and has drawn excellent performances from each of her cast.

Pinter's plays are all about the words and the pauses.  What is said, or, sometimes, more powerful, what is not said?  The cast ride the silences and sometimes difficult dialogue with supreme skill, creating great depth and emphasis in their given roles.
Ed Gaughan's Stanley takes the play.  He creates a nasty, unshaven, un-likable character. His transitions are from bullying misogynist to a broken man.  His last scene, so painful, some might find it uncomfortable to watch.
Maggie Steed’s tragic Meg is outstanding as Stanley cruelly taunts her.

Beautifully portrayed, from the anxious clenching of her hands through to the emergence of the giggly girl inside when she is in party mood.

The rest of the cast, Paul McCleary (Petey), Danusia Samal (Lulu), Desmond Barrit (Goldberg) and Keith Dunphy (McCann) are equally strong, but lack the same impact as Stanley and Meg.
Designer Dick Bird has created a set that evokes the run down boarding house well. I did think, however that the raising and lowering ceiling between acts seemed unnecessary.
The Birthday Party isn't always the easiest of dramas to watch. That said, if you have never seen a Pinter play then this might just be the time to try it.