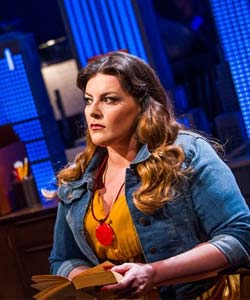 Tell me on a Sunday

Tell Me On A Sunday at the Palace Theatre

Tell Me On A Sunday has gone through many changes, since it first arrived in 1979, but the heart of the piece remains.  This one person show has starred Marti Webb, Faye Tozer, Patsy Palmer, and Denise Van Outen.

This time out, it is down to Jodie Prenger to hold the stage for one hour, playing Emma, the girl who may keep losing out on love, but the through the medium of song, she sets out to make the audience laugh, cry and empathise.

Prenger, as always is delightful. Applauded as a singer and quite underrated as an actress, she comes into own here. She has a canny ability to interpret songs such as the iconic, Take That Look Off Your Face and It’s Not The End Of The World.

Don Black’s lyrics are clever and knowing, so much so that Emma’s checklist of what she wants from a man, changes as the piece goes on. She is happy to settle for married at one point and this is when a real air of despair kicks in, and Prenger rises to this with ease, despite the fact that the character puts you through the ringer many times.

The staging is very simple, but sadly a bit cheap looking for a touring production. The New York sky scrapers resemble piece of sprayed Lego, and this detracts slightly from Andrew Lloyd Webber’s sweeping music.

But, Jodie is such a great show-woman that, in the end the show rises or falls on her shoulders and thankfully hers are broad enough, to carry you through. She has great comic timing, has the ability to emote through song and connects with the audience with ease.

The songs are so memorable, that you do feel that you are you are listening to someone’s greatest hits. I have seen this show three times now, and grew up with the Marti Webb version, as my parents had the album. But, here Prenger does make it her own.

As the show is only an hour long, the second half consists of songs and chat, in the form of a Q&A. Jodie has such a warm personality and playful sense of humour that, she can entertain without the aid of a script. And you realise how she got here, the public voted for her in droves to play Nancy in Lionel Bart’s Oliver on the hit show I’d Do Anything.

If you are a fan of this Blackpool lass and enjoy sung through musicals, with no dialogue, Tell Me On A Sunday is ‘very you’.

The show is touring the UK until 8 June. Further tour dates are here:  http://www.tellmeontour.co.uk/