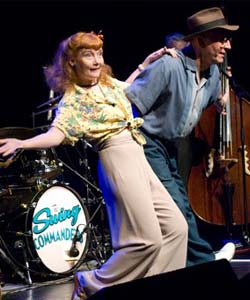 Swing Commanders, the name says it all. This fun filled fivesome play music from the 20’s through to the 50’s with more than a nod to the big band era. All the band are exceptional musicians with a special mention to Gaynor Sutcliffe, a classically trained musician who could turn her hand to everything.

Not only did she play the piano, trombone, accordion, fiddle and double bass but never stopped smiling and dancing all through the concert. You know it has been a good night when it starts at 8.00pm and when you look at your watch at 9.30pm it is actually 10.45 and they have been on for almost 3 hours, never stopping dancing and entertaining.

There were many highlights throughout the night but especially” Western Lullaby” which you would know better as “In the Blue Ridge Mountains” by Laurel and Hardy who actually made an appearance in this song dancing in their inimitable way. These were actually GI Jive, a couple who looked old enough to be your grandparents but, boy, could they move, jiving and jitterbugging like teenagers.

They appeared several times throughout the night especially in another highlight, a real grooving version of “King of the swingers” the Disney classic. If you want a fantastic night out listening to jazz, swing and country music then these are thoroughly recommended. To find out more or where they are appearing.