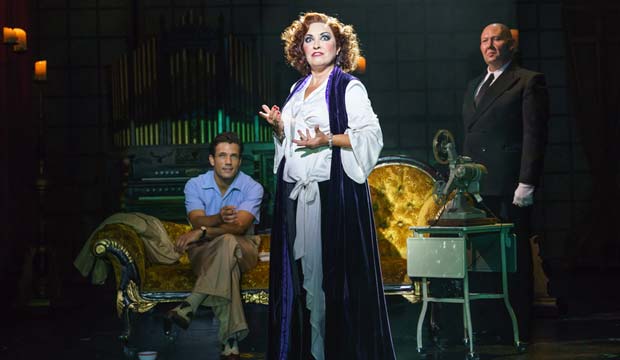 The role of Norma Desmond in Sunset Boulevard, the faded silent-movie star frantic to cling onto the glories of the past, is one of the most iconic in modern musical theatre. “I am big! It's the pictures that got small,” shouts the crazed ill-fated star whose career has been blighted by the coming of sound, and my goodness does this production have a punch.

Twenty-six years after she worked with Andrew Lloyd-Webber on creating Norma Desmond, Ria Jones plays the role, at The Palace Theatre, Manchester.

Jones briefly stepped into the role for Glenn Close when Close fell ill while performing in a concert staging at the London Coliseum last summer. I had the privilege of seeing Close at the Colissuem and so I was interested to see what Jones would bring to the character. Jones did not disappoint. She filled the theatre with a rich, controlled sound and took us on a journey that was just as haunting as it was emotive. Swooping and soaring through the music, she bought the character alive with a pronounced depth that felt real and emotive.

Desmond spouts throughout the production - “we didn't need dialogue. We had face”, and my goodness does Jones capture the wild-eyed delusional fantasist with such spirit. It was a powerful, and at times a scary depiction, as we see this striking portrayal of a star who failed to survive the transformation of the film industry. Yet Jones caresses the vulnerable side of Norma Desmond in great arias such as ‘With One Look’ and ‘As If We Never Said Goodbye’.

Nikolai Foster's production delivers on every level. Colin Richmond's design captures both the glamour of a Hollywood film set and a mansion that with its sweeping staircase and candelabra fittings adds a gothic feel to this story. The use of the set to show scenes from the silent movies is very imaginative and this is all given weight by the superb sounds from a live orchestra under the direction of Adrian Kirk.

Alongside Jones, Danny Mac (Joe Gillis) is superb with an emotional and passionate portrayal. Adam Pearce plays Norma’s long-suffering butler with one of the most powerful and impressive vocal ranges I have ever encountered and Molly Lynch is also up there with the best. Her portrayal of script editor Betty Schaefer, is commending and her singing graceful. However, I think it’s fair to say that there is no weak link in the cast. The acting, harmonies, movement and timing is effortless. From their opening number to the new year scenes at Schwab’s drugstore, the action is enthralling.

As the show closes Desmond quotes the famous line, “All right, Mr. DeMille, I'm ready for my close-up,” and tonight the audience gave Jones and the cast the standing ovation this show clearly deserves. This outstanding production just has to be seen. I’m probably planning to go and see it again!!