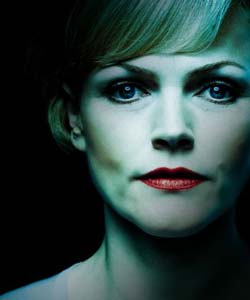 A Streetcar Named Desire at the Royal Exchange Theatre

This play is the Royal Exchange Theatre's fastest selling in their 40-year history. As soon as you sit down, and see Maxine Peake's Blanche DuBois 'play' all those around her, including you the audience, you realise why Manchester has fallen for her and the production.

Tennessee Williams’ iconic female character is often hard to sympathise with, as she is played as a hysterical whirlwind of a character who flits from one disaster to another, with no thought towards other.

Director Sarah Frankcom provides you with ‘different’ version here, as Blanche is beguiling and ‘lost’ but also ferociously funny and she has elements of warmth and a protective air, particularly over her sister, Stella, played to perfection by Sharon Duncan-Brewster.

As the unexpected guest, with a knack for upsetting the apple cart, Maxine Peake performs magnificently and delivers a turn of stunning magnitude. You cannot take your eyes off her, as she ‘traps’ people like flies in her web of deceit.

Peake also imbues Blanche with so much vulnerability and pain, that you genuinely feel for her, as the crushing climax delivers the final blow.

Ben Batt is sexy, funny and equally scary as the domineering Stanley Kowalski. And Yousseff Kerkour is terrific as shy pawn in the struggle, Mitch.

The heat of the deep south is superbly evoked and this is one hot ticket. So, if you have managed to bag one, lucky you – as this Streetcar is worth catching.