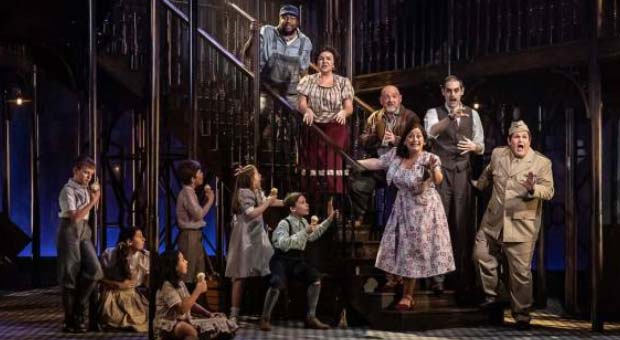 Street Scene at The Lowry

Premiered on Broadway in 1947, Kurt Weill’s ‘American opera’ depicts the interconnected lives of a group of families in a Manhattan tenement. Set in a largely immigrant community in the 1940’s, a collection of richly diverse characters are presented to us in Street Scene providing a powerful resonance for audience today.

Moving back and forth between opera and musical, Opera North does a stunning job! The performances are outstanding from the entire cast and combined with Matthew Eberhardt’s impressive direction, this really is an exceptional ensemble production.

James Holmes, one of the leading interpreters and advocates of Weill’s music, ensures the highest musical quality throughout. Francis O’Connor’s multi-level stage design captures perfectly the elements of the tenement block and adds to the somewhat uncomfortable feeling of the proximity of family groups living on top of each other.

The singing and performances are remarkable, and it is difficult to single anyone out. However, Giselle Allen shines in her dramatic performance as Anna Maurrant who is having an affair with the local milkman Steve Sankey (Paul Gibson) whose romance ends in tragedy. Gillene Butterfield plays beautifully the character of Rose and with her clarity of performance she demonstrates the tender fragility of her relationship with bookish neighbour Sam Kaplan played by Alex Banfield. Banfield performs ‘Lonely House’, with such a breath-taking depth of feeling in his tenor tone that it really was a very moving moment.

There are some tremendous performances from Michelle Andrews (Rae) and Rodney Vubya (Dick) that shows off some magical choreography set by Gary Clarke. The children of the ensemble are just as impressive. They are focused, professional and assured, demonstrating the superior talent that Opera North attracts to its productions.

Rupert Christiansen recently wrote for the telegraph, “Opera North, a company with a terrific record for taking risks and pushing the boundaries”. This is certainly true, and this performance is testament to the years of hard work that the company has invested into their chorus. A wonderful demonstration of ensemble opera. Long may this creativity, contrast and magic continue.

Opera North returns to the Lowry in November with Verdi’s La Traviata, Bg may this creativity, contrast and magic coernstein’s West Side Story Symphonic Dances and Trouble in Tahiti and a dark and unsettling co-commission and co-production with English National Opera of Iain Bell’s Jack The Ripper, The Women of Whitechapel. Get your tickets at www.thelowry.com.