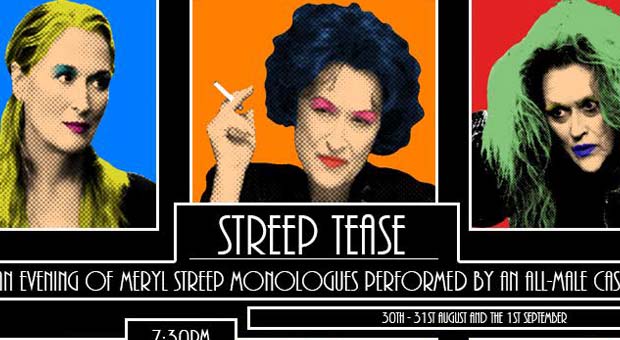 On one level Streep Tease can be viewed as a set of Meryl’s greatest hits. On another level it’s four men paying homage to a star they obviously adore. It’s billed as a series of monologues, although some of them have supporting extras, and they run the gamut of emotions.

The Devil Wears Prada (led by Paul Antony) captured the lady herself perfectly. The excerpt from Sophie’s Choice (a solo by Michael Pope) was so harrowing that nobody thought it appropriate to applaud when it was over. One True Thing (solo by Callum Taylor) was moving in its sheer simplicity. The two scenes from Kramer v Kramer (both solos by Josh Vince) showed just how messy divorce can be.

Other excerpts are slightly less daunting. In The Iron Lady, Paul transported us back to the days of the Poll Tax and Mrs. Thatcher’s intransigence. In Doubt, Michael wears the same menacing bonnet as was used by Meryl in the film to great effect. I wasn’t familiar with Ironweed but Callum (in a different bonnet) carried it off well. The evening rounds off with a scene from August Osage County where Josh (as Violet) castigates the remaining family members after her husband’s (their father’s) death. It’s hard to think now that the film supposedly had comic elements.

The evening doesn’t end on a dark note though, as Dancing Queen had us on our feet.

Streep Tease is a good example of how imitation is the sincerest form of flattery and it’s a pity that more people weren’t present to see the show’s UK debut.

More and tix are here.