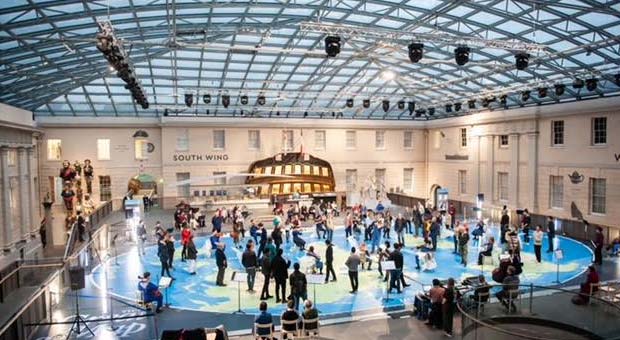 Sounds of Nature at Stoller Hall

A most unusual evening at the Stoller Hall as part of the Sounds of Nature year long programme.

First part was Vivaldi 4 Seasons, reimagined with background sounds of nature, forest creatures, wind, ice, as well as dance and movement and props reflecting the story of the seasons that the familiar score tells.

It was fascinating to sit and watch as well as hear, as the orchestra participated not only by playing their instruments, but moving around the floor, becoming creatures themselves at times during the changing seasons, making this a fascinating experience to listen to and watch. I had forgotten how charming the Vivaldi was and hearing it live, with such an imaginative twist was a real treat.

Second part, for the Melting, Shifting, Liquid World piece, the audience were given bone conduction earphones which allow sound to be broadcast clearly directly to the cochlear through cheekbones, whilst still able to hear both orchestra and sound from speakers as part of the whole mutlilayered experience.

We were allowed to walk around the performance space and in between the musicians so the sound from the earphones, speakers and orchestra constantly changed and took on a different emphasis. It really was a most fascinating experience and it had a super relaxing effect as it felt like a total body experience too. So lovely to be able to get so close to skilled musicians and really feel a part of the creativity. The natural world affected by climate change felt all around us for that whole period of time.

Trinity Laban String Ensemble : A Change Of Season for electric viola and strings

Would love to experience this again, highly recommend.

Many thanks to the FOH staff at the Stoller, for whom this must have been quite the challenge to manage. It was wonderfully done.

More at The Stoller Hall