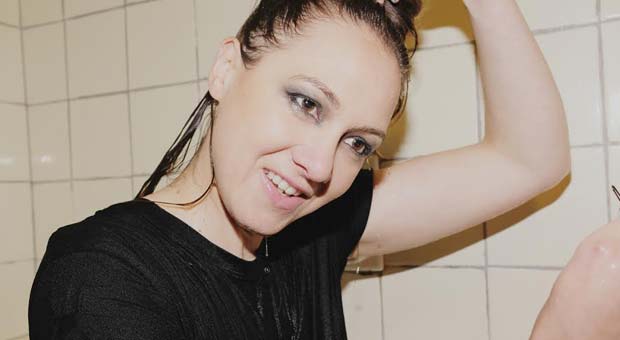 Making her first ever appearance in Manchester, Bern born Sophie Hunger plays a healthy 70 minute set at one of our favourite Manchester venues. Often lazily dubbed a ‘folk-singer’, Hunger proves that she is multi-faceted (as are her wonderful band), not only in style, but in her constant instrument swapping too.

In all fairness the transition in style from her first solo outing in 2006, ‘Sketches on The Sea’ to her sixth and most recent ‘Molecules’ is clear to see and hear. The story goes that a move to Berlin a couple of years ago has helped influence the newer sound. The electronica is clearly evident and mostly subtle, weaving its way in through the brilliant melodies, which are still predominantly guitar based. It is at its least subtle (and delicious) in ‘Tricks’ which is an absolute banger (no other expression would work) and goes perfectly with the Deaf’s always perfect lighting. We almost felt like we were in Berghain for a 4 minutes...

Opener ‘She Makes President’ eases us in to the set, which naturally focuses mostly on ‘Molecules’ but we do get visits to ‘Monday’s Ghost’ (with the excellent ‘Shape’), ‘1983’ (gentle closer ‘Train People’) and ‘Supermoon’ (‘Love is Not The Answer’). Personal highlights are new tracks ‘There Is Still Pain Left’ and ‘Coucou’. Regarding the latter, Sophie warns us that she will be singing partially in French and that the following track will fully be in French (a Noir Desir cover). We are also treated to further languages in the form of Swiss German and German, which just helps show how comfortable she is across multiple genres and forms.

‘Coucou’ is one of many songs that really helps showcase the exceptional three piece supporting band (from Paris and Zurich). The four-way harmonies are absolute treats, and similarly to Hunger herself, the two Parisians work their way through various instruments: keys, bass, digital percussion, a saxophone and even a flugelhorn.

Hunger takes a few songs before she addresses the small but dedicated crowd. The lack of interaction does not come across as aloof, but just seems the musicianship on stage is so deep that they just really get into the zone when performing: pleasantries are unnecessary. There is some constant awkwardness when she does attempt a story, or a song ends (when to clap?!) but that just adds to the charm.

Sophie and band are in fine form and there are hints of Heather Nova at times, which is always a compliment. Encore begins with ‘I Opened a Bar’, and if that bar was closer to home, we would be there regularly. Hope the sophomore visit to Manchester is not too far away.