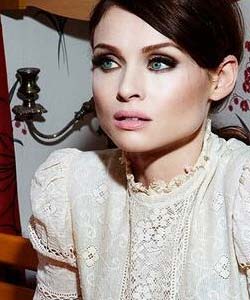 Lady Ellis-Bextor takes to the road for the first time in about five years following the success of her 5th studio album Wanderlust and a run to the final of last year’s ‘Strictly’.

Opening with the thundering Birth of an Empire, the crowd are in a rapturous mood and Sophie is having a ball from the offset. Clearly overjoyed to be on the road with her husband Richard Jones (of The Feeling) and also good friend and album co-writer/producer, Ed Hardcourt, the energy and natural warmth oozes out.

Wearing a red, almost Bavarian dress, we are guided through the whole new album, which really comes to life live. Some of the Eastern European sounds of the album, albeit quirky (see 13 Little Dolls and Love Is a Camera) are great fun. A cover of Pulp’s Do You Remember the First Time, is fantastic, as is first single Young Blood. The latter shows wonderfully how Sophie has matured as both a singer and song-writer. The two backing vocalists really deserve a mention and double up as string players for some tracks.

Following a very kind donation of Cadbury’s Cream Eggs (things could’ve gotten ugly- we all wanted one), the encore sees a change of dress and a shift to the disco. We’re treated to huge hits Take Me Home, Heartbreak Make Me a Dancer, and of course, Murder on the DaRRncefloor, plus completely fitting covers of Lady (Modjo) and Sing it Back (Moloko).

But the absolute highlight is still to come. As the lights are about to come up and we’ve cheered and clapped like mad folk, Sophie runs to the balcony of The Ritz and we get one final number from above, the lovely little Interlude on the current album. Singing acappella, the crowd is in awe and there are tears. ‘Wow’ moments rarely come this good. Please come back soon.

For more about Sophie.