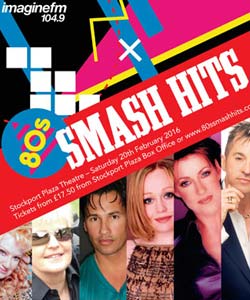 Smash hits from the 80s at Stockport Plaza

We were promised a chance to re-live the magic of the glorious 80’s with all our favourite chart toppers, with non-stop hits from the original artists.

Were you 'a child of the 80's'? A world of The Rubik Cube, Charles and Diana, Margaret Thatcher and Band Aid taking the globe by storm?

It was also the decade that tonights lineup all entered our consciousness and in some cases remained there to the modern day.

The evening was hosted by Leroy Lurve (himself something of a local legend) who in his signature attire, set the tone for what was to follow.

Following an initial 10 mins of Audience participation involving large prompt cards bearing the lyrics to 'Never going to give you up' by Rick Astley and several members of the packed house,we were ready to welcome our first performer, Kelly Wilde.

Top to toe in stretch leatherette with plenty of chains she showed that she has held her figure well. The voice too, has stood up over the years since her early successes.Renditions of Bonnie Tyler classics 'Total eclipse of the heart' and 'I need a hero' both showed this, and as the warm up for the evening, Kelly finished the set with her own huge hit 'Gloria' the Umberto Tozzi classic most associated with her.

Warmed up we ceratinly were.

By the time Leroy was introducing the next artist, the Plaza was buzzing and we awaited the arrival of former front boy for Brother Beyond, Nathan Moore who looks remarkably good for his 51 years.Certainly from the circle that is.

Chatty and clearly still confident on stage, Nathan delighted his female fans (and maybe some of his male ones too) with his 'moves' coupled with more nurtured vocals on both his own hits and one or two classic covers.

It was then time to welcome the 'most mature'of the evenings performers Hazell Dean.Now 63 she bounced around the stage effortlessly and treated us to some of the greatest hits of the night.

'Whatever I Do (Wherever I Go)', 'Searchin' and my personal Favourite 'Who's Leaving Who' all featured and whilst i would have preferred to hear another fav 'They say its gonna rain' rather than the sometimes overdone 'This is my life', i was happy to have been transported back in time to places,people and situations..

An interval was then followed by more Leroy audience business and then onto our next 'blast from the past' Sonia.

Still diminutive (looking like she hadnt eaten fish n chips for 30 years), the trademark Red hair in a ponytail, wide smile and frequent waves to her audience, Sonia really has stood the test of time in both looks and voice.

‘Better The Devil You Know’, 'Hopelessly devoted to you' and ‘You’ll Never Stop Me From Loving You’ all went down very well with an audience now in a state of 80's euphoria, all pretty much on their feet and clearly loving the whole affair.

Kajagoogoo front man Limahl then took to the stage in a wonderful Pale Blue suit and regailed stories of his early years in the music industry.The initial self-deprecation was balanced by a large number of pre-signed photographs for ladies of a certain age, who lined up along the front row frantically grabbing for their own momento of the evening.

Vocally, he sounds the same and still moves in that 'Ferryiesque' manner which endeared him to audiences across the globe at his early height.

His 20 min set included numbers perhaps lesser know than others, but another personal favourite Giorgio Moroder penned 'Never ending story'which in 1984 dominated charts all over the world, was equally well accepted by everyone else in the house.'Too shy' quickly followed and he left the stage to great applause.

What more could follow all this? The near hysterical audience were by now constantly on their feet, and ready for the final performance.

The core of her set was to pay homage to several of the great female iconic chanteuse of the 80's decade, including Debbie Harry, Annie Lennox and Belinda Carlisle with a medley of their signature songs.All crowd pleasers to be sure.

Eurovision winner ‘Love Shine a light’ and ‘Walking On Sunshine’ brought the proceedings to a close.

Particular note too for a hard working troupe of dancers from Stockport College who supported many of the numbers through the night.

High praise too for the team at the plaza for their friendly, helpful approach, aswell as their impeccable dress sense.Very stylish.

This was not an evening of high art, however not everything needs to be such.This collection of seasoned artists have not only survived 30 years in the music industry, with all that it entails, but are still able to entertain a packed Stockport Plaza house to euphoric levels and make us all feel 25 again.

As we sprawled out into the Chilly, February night (some with just Dayglo vests and tight fitting flares) you would be hard put to find anyone who had not had a thoroughly good, fun night.

Thank goodness for the 80's say i and ALL that we remember about it.