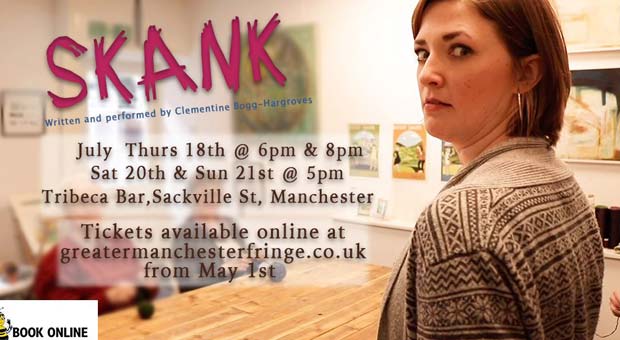 Skank at Tribeca for GM Fringe 2019

Skank, which had its first of 4 performances at Tribeca tonight as a Manchester Fringe event, has promise but needs a bit more work to make it work. It’s a great idea, but it didn’t quite fulfil its potential.

It’s a monologue – think of the original Shirley Valentine – performed by Kate (Clementine Bogg-Hargroves, who wrote the play and performs it) with minimal, but clever props. When else have you seen a desk that transforms into a medical couch that incorporates stirrups for an intimate internal inspection? After a while though, some of the quirkiness becomes slightly annoying.

Kate is the only person on stage, but holds several voice over conversations with various people (office colleagues, her boss, her brother etc.). But, although her opposite numbers are in the main male, the voices we hear are, with one exception, female. Why? The opening gambit of carrying round an empty bean can starts out as amusing but grates after she’s been carrying it round for days, trying to dispose of it greenly.

This is the story of a bored office worker who is looking for a better life, but actually can’t be bothered to put the effort in. There are some good one liners to be had, and Kate’s love life is a constant theme. The language includes a modest amount of swear words but these are in context. Some seriousness is injected with the medical issues, but the mental issues at the end  might have been developed better. They did, at last, though, allow Kate to rid herself of that sodding empty bean can.