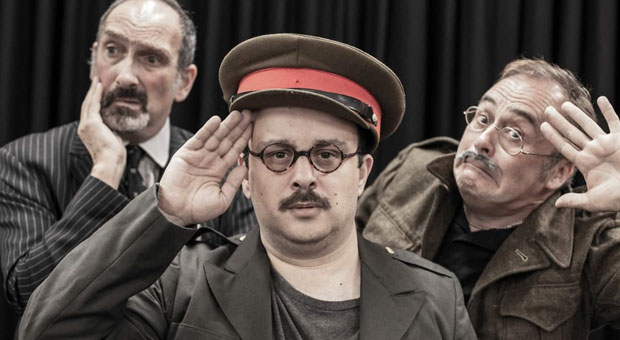 Sitting in the basement of the rather eclectic Peer Hat in Manchester, I wasn't quite sure what to expect from the next hour's entertainment.

We had been promised reprisals of some of the most popular sitcoms taking the characters out of their comfort zones and into strange, weird and wacky situations.

Included in the show is a trip to HMP Slade and 'Blood's Thicker Than Porridge' where a serial killer is on the loose. Howard Whittock channels Ronnie Barker perfectly in an amusing start to the show.

Pete Gibson then embodies Alan Bennett in a witty monologue about how he and Thora Hird had predicted the end of the world prior to David Bowie writing his "Five Years" song.

Excellent writing from Paul Magrs, who also writes "The Generation Game". Starting Matt Melbourne as Larry Grayson, this piece is one of the highlights of the night. Melbourne has worked hard to pull off Grayson's mannerisms and demeanour and the result is outstanding.

Closing the night is "Mainwaring in the High Castle" a little look at what if Hilter had won the war - and conquered Walmington-on-Sea? Farcial, over the top and touching in equal measure, it's a sound piece to close the night and make us reflect on what makes the British sitcom such a success.

Even better, everyone concerned has given their time for supporting children's charity, the Lagan's Foundation.