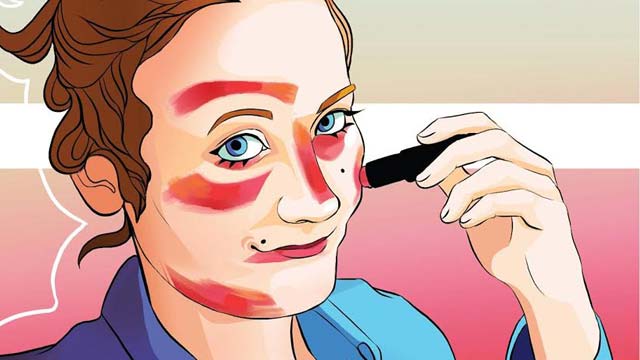 A curious clown is stuck between the gender binary.  Through mime, slapstick, and armed with a wardrobe of clothes, performer Miranda Porter explores the violence of assimilation.  Is it really rewriting the rules if you haven't read the rulebook?

This show gave us such a great time.  You start off not really knowing where to look, and quickly realise your own internal double-standard when it comes to male and female nudity.

As the show progresses and one becomes more and more comfortable with the performer's anatomy, hilarity ensues.  From Le Juice Theatre, Miranda Porter brought a one-person show about a curious clown, stuck between the gender binary.  Inspired by and enamoured with a photograph of a headless Calvin Klein male model, Porter sports matching boxers, and a red clown nose - and a violently hilarious attempt to assimilate with gender expectations unfolds.  Think a lot of clowning around, an unfortunate incident with a folding chair, and some alarming audience participation.

Us gals were left with a new appreciation for the entertainment value of our breasts and we're keen to take our larger cup-sized friends along tomorrow night to show them what they're missing out on.

Catch it at the Kings Arms in Salford at 9pm until the 20th July.