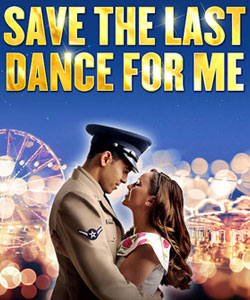 Save the last dance

From the writers, producers and directors who brought you Dreamboats and Petticoats. Save the Last Dance for Me has arrived at the Manchester Opera House. It will take you back through the 'music and magic' of the early 60's, a time when each passing week brought another Rock 'n' Roll classic.

We follow two sisters, Jennifer (Hannah Frederick) and Marie (Megan Jones), on their seaside holiday in the summer of 1963. They soon realise that life isn't so black and white, by experiencing the joys of an United States Air Force base. This soon leads to holiday romance and young love, where the sisters realise that life is quite colourful after all.

Starring Jason Denton as Curtis and A J Dean as Milton, these male leads potray excellent american airmen, who would sweep any women off their feet. However, Curtis realises that the fun of passing tourists isn't necessarily what he needs. The american accents and acting provide a realism not always seen in theatres.

The singing is first class, making you really believe you are with the Rock 'n' Roll stars of the 1960s. The scenery appears very simple and plain to begin with, however you soon realise its all been saved for the Air Force base. The first act does seem rather long, with more songs that necessary.

However, the second act is full of life, which will have you singing and clapping along. If you are a fan of the 1960s Rock n Roll, then this is one show you won't regret going to see. Save the Last Dance for Me is on at the Manchester Opera House until Saturday 3rd March 2012.