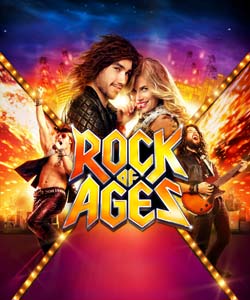 A fun audience participation rock opera using 80’s AOR rock classics. Everyone was up on their feet towards the finish. The story isn't the deepest, but it's fun, and the 80s music is fantastic. It set amoungst  the long haired staff of a down-at-heel music venue, on Los Angeles’ Sunset Strip, adjacent to a German property developer.

It also must be said that some of the audience commented on its smut laden “script” that heavily featured young women in skimpy underwear and stockings. "Tasteless objectification of women" was a remark made on our row.There was also a cheap male voiced tranny stripper gag, used twice for emphasis.Some of the LGBT community may well feel offended by such things.

Best bit however,was the backing band, who played all the numbers capably.

The two main characters (Noel Sullivan, Cordelia Farnworth) have great voices, as does the strip club Madam (Rachel McFarlane) There are few faithful covers of the songs, but  it’s well worth going to see, for the energy, the fun, and especially if you're an 80s music fan. Don’t stop believing !

High art it is not,but great fun for a night out with friends if you enjoy the era and arent worried about some of the aforementioned,it certainly is.

The show runs until This Sat.