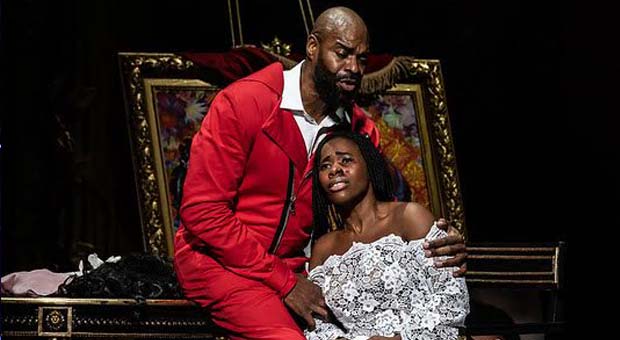 Opera North’s latest season at The Lowry opens with a statement;

‘Art has always remained at the forefront of humanitarian values. We strongly believe that art cannot be subservient to political propaganda; instead it should be utilised for developing critical thinking and promoting dialogue.’

This is followed by a rousing performance of the Ukrainian national anthem to firstly acknowledge Opera North’s support for artists and all the people of Ukraine and secondly offers the audience a moment of contemplation and reflection at the beginning of the performances, which respectfully brought a standing ovation and a huge applause.It also seems appropriate that this complex production of Verdi’s Rigoletto starts with reminding us that art is about critical dialogue and allowing those marginalised in society an opportunity to have their voices heard. The burning emotional and psychological truths conveyed in the power and passion of Verdi’s music ensures that Rigoletto still has the capacity to shock and challenge assumptions in our own day; and that surely is as it should be.

Femi Elufowoju Jr’s makes his opera-directing debut with this gripping production and IO doubt tthis will be his last. The Opera tells the story of Rigoletto and his daughter Gilda from another angle and brings it right into for the 21st centurywith a powerful interpretation that makes it feel so current,yet so true to Verdi’s setting of Victor Hugo’s Le Roi s’amuse. In Hugo and Verdi, the title role is a 16th-century hunchback court jester, who keeps his daughter hidden away to protect her from philandering aristocrats. Here however, Rigolettois a black man with a vulnerable daughter existing on the margins of an entitled bunch of rich white party animals who cannot be trusted around young women.

Eric Greene as Rigoletto brings warmth to this production with his Baritone voiceand Jasmine Habersham as Gilda provides some very special moments as she handles the vocal range required by this role with pure perfection. However,it is their have a chemistry that makes it feel ever so more current as they take on not onlythe demanding vocal roles, but also constantly convey the danger they experience in their lives.

Occasionally the staging felt a little bit fussy as Gilda sleeps on a stuffed zebra, a car in the final scene which never really served a purpose and the prelude from the Orchestra, led by Garry Walker, took a while to get going, as did the sound balance, which didn’t create the mood that was required at the beginning. However, once we into the swing of the party music of the first scene this was forgotten, as overall Opera North continues to achieve the high musical standardswe have come to expect from them. Roman Arndt as the Duke of Mantua delivers his big numbers with enthusiasm and confidence with a slight Towie-Esque caricature, and Callum Thorpe plays Sparafucile with thechilliness and danger that thisassassinrequires.

This memorable landmark production of Rigoletto can be seen again at the Lowry on Saturday 12th March 2022.