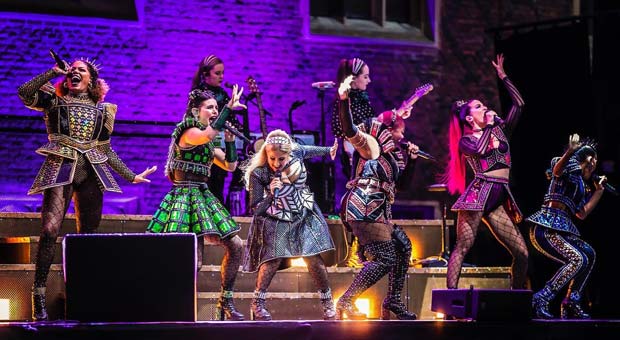 REVIEW: ‘SIX' is an audience pleaser from the start

‘Remember us from you GCSE’S?’

You probably know the history books version boringggggg, well the wives are back and badass bitches retelling the story from their perspective, and throwing some shade on share hubby. BTW you’ll love Anne Boleyn she’s deffo a social media star.

If you've seen Hamilton, you'll see the similarities in "SIX," but taken to the next level with its own hip-hop rhymes and stunning best "Bitchy" wive show. 'SIX' launched a student show from writers at Cambridge University, of course why not it history for start. Writers Lucy Moss and Toby Marlow have shown that with some fantastic ballads and top-notch R&B numbers, the story can be edgy, bitchy and fabulous. Got to mention, that the cast throw some moves with sass and body pops, I need say no more.

The show is set for a stiff competition, each wive has top draw song to try and win over the audience, for who suffered the most, under Henry Thumb.

Each of the cast is badass, telling of the pain and suffering Henry caused and even the odd beheading. For me the whole cast stand out, as the team behind the show have picked the cream of the crop and all deserve a mention. Catherine of Aragon, played by Chlöe hart, just incredible vocals and totally diva. Anne Boleyn played Jennifer Caldwell, so bubbly even after losing her head.

Jane Seymour played by Casey Al-Shaqsy, OMG she’s a power house, telling her story about being the only one Henry loved, ’I gave him a son’ is mention more than once. Anna of Cleves played by Jessica Niles is one of my favourite parts, with the song ‘Haus of Holbein’ which is a reimagined dating portrait game based on Tind*r. Katherine Howard played Leesa Tulley was a blast and totally funny. Catherine Parr play by Alana M Robinson gave me vibes of Whitney Houston and pull off a super ballad.

The wives begin to realise towards the end of the show that they don't need this fight and that being know by just one man is unfair and  that the nobody knows anything else about them, other than who they married. I did learn something that Catherine Parr was a writer and an activist for women's rights for education.

‘SIX' is an audience pleaser from the start, with the audience participating through-out the show. The writers have thrown the odd clever line in with references to the Pope of the time and the historical twists the turns of Tudor history.

Seeing the show in Salford at the Lowry Theatre showed just me how much the fans love the show and I thoroughly enjoyed myself for the full 80 minutes. And even humming somer of the songs on the tram ride home.

Catch the show at the Lowry theatre Salford tickets via here  runs till 14th August 2022.