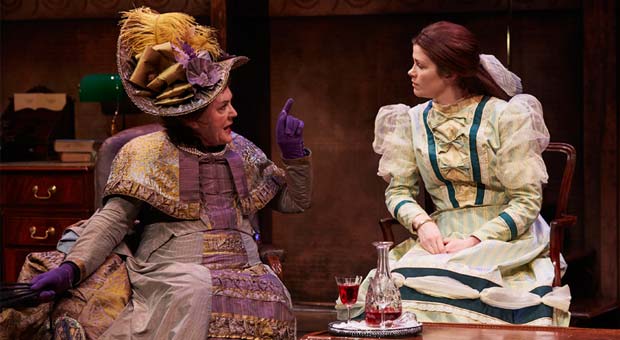 Review of Importance of being Earnest

Written by Oscar Wilde and first performed on 14 February 1895 at the St James's Theatre in London, the Importance of Being Earnest, is a Trivial Comedy for Serious People.It is a farcical comedy in which the protagonists maintain fictitious personæ to escape burdensome social obligations.

Famously, its successful opening night marked the climax of Wilde's career but also heralded his downfall. The Marquess of Queensberry, whose son Lord Alfred Douglas was Wilde's lover, planned to present the writer with a bouquet of rotten vegetables and disrupt the show. Wilde was tipped off and Queensberry was refused admission. Soon afterwards their feud came to a climax in court, where Wilde's homosexual double life was revealed to the Victorian public and he was eventually sentenced to imprisonment. His notoriety caused the play, despite its early success, to be closed after 86 performances. After his release, he published the play from exile in Paris, but he wrote no further comic or dramatic work.

Thankfully the play has been revived many times since with famous films, all Black casts and on several occasions the pivotal character of Lady Bracknell being played by a male, notably by David Suchet in the last West End production.

This play is one of those theatre staples that you often see on school trips (depending on the curriculum) and then in Mid-life and possibly again when older.

Last night at Manchester's famous Opera House, the audience was a fair mix of all the above diversity.

The reason for this is, simply that it is such a clever piece that will always have broad appeal to those of all generations who appreciate the genius of the writing and can follow the complexity of the plot.

You have to concentrate right from the start and keep focused.

This was made easier in this production by a strong ensemble cast, full of notable names from TV, film and previous theatre.

Act one introduces the main male characters Algernon and Jack, ably played by Thomas Howes and Peter Sandys-Clarke laying the core of the plot by way of explaining the back story relating to the name EARNEST.

These two banter away with clarity (very important in complex pieces) and a strong sense of playful fun and rivalry, until the arrival of the majestic Gwen Taylor as Lady Bracknell followed quickly by Daughter Gwendolen,played by Kerry Ellis, when the tone changes and to an altogether more serious nature largely set by Lady B herself.

By this stage we can see that Gwen Taylor's potrayal is already 'softer', 'less dominant' than the more stylised and cantankerous past performances.Dame Edith Evans comes to mind.

Exchanges are pacy and coupled with lots of stage business.

Act two sees us in the country garden of Jack's rural home where Miss Prism and Rev Chasuble first appear and are immediately flirty and in Prism's case, sexually frustrated when in each other's company.

Susan Penhaligon shrugs of her 'glamour girl' past (who remembers Bouquet of barbed wire) as she assumes a very much older character with clearly some history soon to be revealed.

She and Geoff Aymer bounce off each other with plenty of simmering attraction.

As the plot progresses, Louise Coulthard is introduced as Cecily, Jack's ward and when she meets Gwendolen, the two young Ladies embark on some lovely exchanges with great comedic timing and charm.

Act Three opens with a further injection of pace as more is revealed about the various confusions and finally we learn that Prism was responsible for the 'handbag' incident and that Jack is indeed really called Earnest after all.

Everyone is happy, including Lady Bracknell, and its hugs all round.

Her costumes are no less lavish, featuring louche silks, bold patterns, and colour palettes which each echo the different characters’ personalities.

Each couple’s outfits complement one another tastefully, with Lady Bracknell’s, in particular, lilac and yellow ensemble as striking as her overbearing demeanour.

Overall this was an enjoyable production, which was thoroughly enjoyed by an appreciative and quite young audience, frustratingly some of the dialogue was hard to hear in certain parts which may have been more to do with the size and majesty of the Opera House itself.

The importance of being Earnest benefits from smaller and more intimate venues, where all the witty lines and nuances can be fully enjoyed.

Thankfully, adjustments were made by the final act and it was better for it.

The real winner on the night was inevitably Wilde himself who reminds us all, whatever our demographic, the real power of the english language in all of its subtlety.

We loved the final tableau as the play finished, but will save that for you to enjoy when you see it.

And we recommend you do so.

For more information and to book