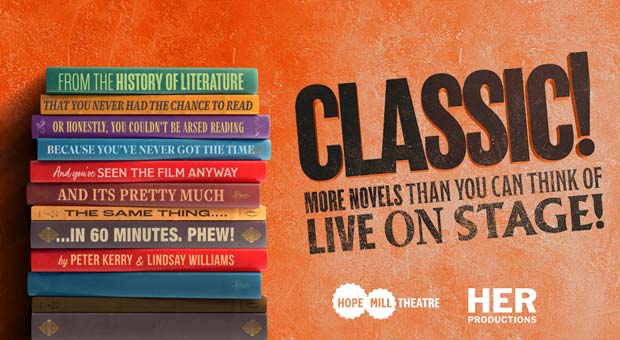 A light-hearted romp through the annals of literature, Classic! takes us on a whirlwind journey of delight. The cast of six throw body and costume at a conveyor belt of characters as they try to beat the record for presenting 42 books in 1 hour.

Written by Emmerdale and Coronation St writers, Peter Kerry and Lindsay Williams, Classic! squeezes a multitude of literary moments into the aforementioned 60 minutes.

The cast of six take us from Jane Eyre to Wuthering Heights; Moby Dick to War and Peace in their own stylised way, through dialogue, song and silent movie. The cast are clearly enjoying themselves as they bicker through their 42-novel challenge, and work well when it doesn’t always go right – water on the stage can be very slippery as Amy Gavin discovered????

It’s all very silly, but also great fun. Particular mention must go to Joyce Branagh, not just for her direction, but for taking on the role of Alun at short notice. When she announced at the start that the actor playing the role (and subsequent stand-in) had both been floored by Covid, it felt like part of the plot.

As Joyce juggled script and props between hands, it became clear that this was not in the original script, but added even more chaos to the delight of the audience – great performance!!

Akin to The Play that Goes Wrong and The Reduced Shakespeare Company, this is a pacy 60 minutes of slapstick, song and dexterous characterisation.

Produced by Hope Mill, the show is heading to the Edinburgh Fringe Festival Aug 3rd-28th at Pleasance 1), where it is sure to leave their audiences smiling and humming the final ditty.

Hope Mill Theatre until Saturday: Details and tickets VIA HERE