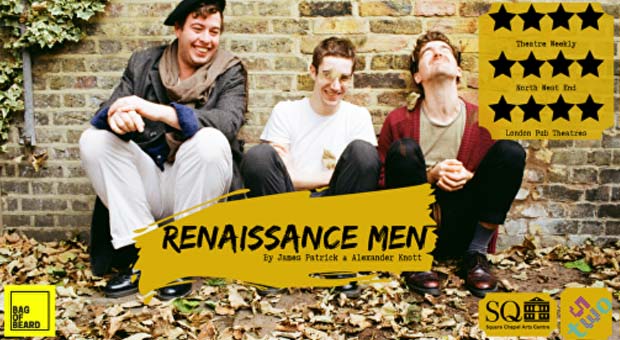 Renaissance Men is a short play - it’s only an hour long – but in that time it manages to develop several strands, which are only completely combined in the closing exchanges.

Three millenials, Irvine (Aaron Price), Quentin (Alexander Knott), and Winston (James Demaine) are sharing a flat in London, where they’ve adopted a Bohemian life style. Housekeeping evidently isn’t high on their agenda, and Irvine’s room is strewn with half empty bottles and discarded sheets of his prose. The play opens with him knocking another one out – in more ways than one – but he’s interrupted by Winston and Quentin, who’ve found a renaissance painting in an antique shop. Quentin is certain it’s worth a fortune. If only they had the £180 being asked for it, they’d be able to sell it on and make a fortune. Irvine reluctantly lends them the money and the rest of the play centres around it.

A lot happens in the hour and it would be too much of a spoiler to go through events. Briefly though, Irvine has emotional problems but we don’t know what caused them until much later when Mr Sutcliffe (Jack Gogarty) – the valuer that Quentin and Winston have brought in – arrives to collect the painting. Dishonesty and deception are not unknown in the art world, and both are exemplified here in spades. Toxic masculinity is a phrase much in vogue currently and it features here, but not in the way one might expect.

The characters are all acted well. Irvine comes across as an introvert who’s not good socially. Quentin and Winston are not introverts by any stretch of the imagination, both living life to the full and on the lookout for opportunities. Mr. Sutcliff immediately comes across as a bit dodgy, but we don’t realise quite how dodgy until the last minutes. The closing confrontations are very convincing and we end up with Irvine perhaps finding his way out of his shell.

Renaissance Men deserves a longer run than its two days at 53two theatre, but it’s on again on the 20th if you can get there.