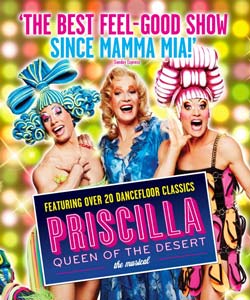 Priscilla Queen Of The Desert and I have had a checkered past. Firstly I went on an ill fated date to see the film version at the cinema on Salford Quays which always haunts me when I watch the film again. Then years later when it opened in London i had booked tickets only to be told on the day that the stage had suffered mechanical problems and our showing that evening,had been cancelled.Then finally when it came to Manchester last time around, I was working away and couldn't get to see even though every queen in Manchester seemed to have been there.

So putting all that aside, I could not wait to see it on its opening night,having recently returned to Manchester and by the feel of the audience on our arrival, I was not the only one.
The show opened to rapturous applause complete with the high camp that you would expect and the story began to unfold.

From the very start Richard Grieve stole the show in an wonderful performance as Bernadette, the accent and costumes were just what I had always expected and I fell in love with her just as I did with the original film.
The songs featured in the show are fantastic, like a mix tape of hair brush diva tracks which thrilled the audience as did the sensational costumes and hilarious script.
Many of the famous one liners from the film are also in the stage show, but some were left out, which did surprise me.
This does however, not effect the show at all.
The set is very clever indeed and just a little camp and So as a Priscilla stage show virgin,I am unable to compare it to the original London stage version.It must be said that if it's high camp you are after, then this is definately the show for you.
Throughout the evening,the show delivers on almost every level and the crowd loved it.
The signature ping pong routine,in particular, had the house in fits of hysterics.As did the scene where Felicia goes into the outback town on her own which was both well done and very moving. In fact Graham Weavers's performance as Felicia was full of brilliant energy.
Full credit too, must to go to the soulful voices of the three Divas, who provide a sensational,continuous soundtrack throughout the show. They really pull the whole show together.
To be balanced,if there was one flaw in the show, I would have to say it was Jason Donovan. He seemed tired and even a little bored of the part.This was a comment that I heard a lot on the way out and we all hoped it was just 'one of those nights'.That apart, this is a show which thrills, titillates and thrusts you into happiness, the perfect night out for a chilly Monday night in February, a must see for everyone and we highly recommend you all go if yo can get a ticket.