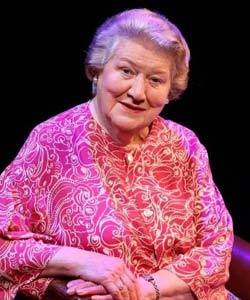 Patricia Routledge at the RNCM

Dame Katherine Patricia Routledge, DBE (born 17 February 1929) is an English actress and singer. She is best known for her role as Hyacinth Bucket in the British sitcom Keeping Up Appearances (1990–95), for which she was nominated for the BAFTA TV Award for Best Light Entertainment Performance in 1992 and 1993. Her film appearances include To Sir, with Love (1967) and Don't Raise the Bridge, Lower the River (1968).

On television, she came to prominence during the 1980s in monologues written by Alan Bennett and Victoria Wood; appearing in Bennett's A Woman of No Importance (1982), as Kitty in Victoria Wood as Seen on TV (1985–86), and being nominated for the BAFTA TV Award for Best Actress for Bennett's Talking Heads: A Lady of Letters (1988). She also starred as Hetty Wainthropp in the British television series Hetty Wainthropp Investigates (1996–98).

This week together with Edward Seckerson she graced the stage at Manchesters RNCM and we were there..

So what links Dame Patricia Routledge with The Beatles?

Answer: Abbey Road, where they all once recorded.

This was just one of the many facts that we all learned about this enigmatic lady now in her 9th decade and still going strong, on this very special evening

In the company of question master Edward Seckerson, a packed house was treated to anecdote after anecdote, about her largely unknown, yet hugely successful career in musical theatre, decades before anyone had ever heard about Hyacinth Bucket.

The first part of the evening, was devoted to her early days in Liverpool (living in Birkenhead) and we heard how she took her early musical influences in the home, through to her schooling and then in turn, onto performance in various places, all with the support of some key individuals who had recognised the signs of her talent and helped her to develop moving forward.

The audience was quickly left in no doubt that this household name with a plethora of awards on both sides of the big pond, had actually stumbled into a theatrical career,(she trained at the Bristol Old Vic Theatre School) largely because of the influence and assistance of these same people.

Edward, who is clearly an adoring fan, thenwent onto ask Ms Routledge about her early breaks and opportunites in show business which, we heard, included the d'oyly carte and how she made her professional stage debut at the Liverpool Playhouse in 1952 and her Broadway debut in How's the World Treating You in 1966. She also regailed tales of when she won the 1968 Tony Award for Best Actress in a Musical for her role in Darling of the Day, and the 1988 Olivier Award for Best Actress in a Musical for Candide.

By this stage , Dame Patricia was now a major musical star in demand in both the West End and on Broadway and we heard about the key meetings with Jules Styne, Leonard Bernstein, Joe Papp and Richard Rodgers.The latter actually wanted to write a score just for her.. Now how people can claim that accolade?

There could be no evening in the company of Pat Routledge without mention of the 90's creation Hyacinth Bucket in the comedy series Keeping up appearances.Her socially pretencious 'monster'became a global hit and she clearly delighted in the fact that in the USA viewers actually have candlelt supper nights in her honouras an homage.

Alan Bennetts A Lady of Letters was another of her memorable performances, as was,  Hetty Wainthropp and again both were referenced during the conversation.By now, every remark made contained the names of  major stars or productions and we all lapped it up with relish.

The staging was beautifully simple with just a couple of chairs,coffee table and potted greenery behind, with a very 'young' dress code from Mr Seckerson complemented stylishly by Ms Routledge who was much more Carmen Dell'Orefice than hyacinth..

Despite now using a stick for walking support Patricia Routledge appears to confound her advancing years and obviously has a very youthful and optimimistic attitude which shows no sign of retirement.Thankfully.

Throughout the entire evening she amused us with her characteristic sharp wit and self-deprication, which was enthusiatically shared with an equally adoring audience, of it has to be said, a 'mature' crowd..

The evening's conversation was interspersed with several examples of her musical triumphs with the highly camp 'Little Mary Sunshine' and the iconic 'Climb every mountain', notable highlights for us.

The fact is, her strong Mezzo voice could have easily taken her in the direction of the opera world, but musical theatre was the lucky beneficiary in the end.

Full marks too for choosing the RNCM with its wonderful acoustic and intimate atmosphere.Such an evening could well have struggled in a different auditorium.

As we all wandering into the Manchester night, the praise for Ms Routledge was unanimous and we all agreed that we had been in the presence of greatness.

Whats on at RNCM