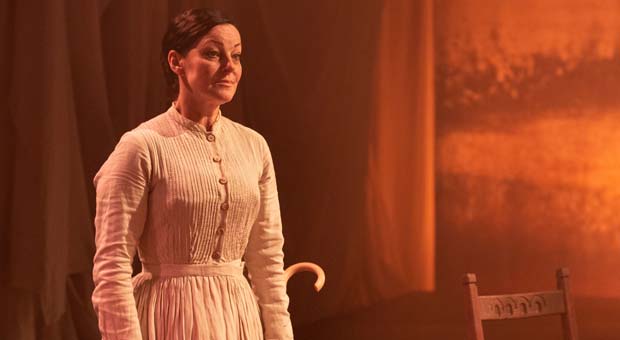 Show your ticket, buy a drink, take a seat down in the old theatre chair and watch the space come to life.

The Hope Mill Theatre is a space of intimacy, with their comfy bar and a perfectly sized theatre for productions such as this.

The audience file in, while bird song plays in the background, the theatre smoke fills the stalls, while a robust, timid figure lurks in the shadows.

A tube shaped curtain hangs in the centre of the stage as 2 figures appear to be in the motions of passion. The stage sets the perfect synopsis of the production, older women chasing the love and passion of a sensitive man.

The tubular curtain floods with light, depicting a man (Giorgio) and a woman (Clara) basking in the light of passion as the Stoic figure leaves the stage. Dean John Wilson who plays Giorgio, in short  is 'the perfect man', he immediately makes you believe he has right personality for the role. Kelly Price who plays Clara, is the elegant and exquisite mistress  located in Giorgio’s life.

As the story progresses, we see this perfect world of passion come crashing to a halt as Giorgio announces to Clara that he being posted to a distant barren, in rural Italy. Soldiers march onto stage and begin to set up for dinner featuring Juan Jackson who plays Count Ludovic/Lieutenant Barri, Tim Walton plays Colonel Ricci, Steve Watts  plays Major Rizzolli/Fosca’s Father, Charlie Waddell plays Sergeant Lombardi/Mistress, Danny Whitehead plays Private Augenti/Young Fosca and Adam Robert Lewis  plays Lieutenant Torasso/Fosca’s Mother. All fantastic Actors, and in my opinion the are perfectly cast for Passion, all dynamic and all completely right for the role.

Now we meet the perfect Captain in Giorgio with his commanding style. The soldiers and Giorgio’s Dinner is broken by the screams of pain from Fosca. Ruthie Henshall plays Foscas character in a perfect Stoic manner showing a character in pain who is also happy to have met Giorgio. Personally I found all the scenes so touching and idealistic,with a Score by Stephen Soundhiem and this show is a great way to celebrate Stephens life, who sadly died recently.

There are so many amazing moments, one of the highlights is when Giorgio and Fosca first meet as she returns a book borrowed from Giorgio. The scene brings together the passion and love of Fosca and sensitivity of Giorgio.  This show is full of such little moments of joy, passion, love and lust which all makes for such a compelling production. To reveal anymore would spoil the magic, I suggest you come see this amazing production.