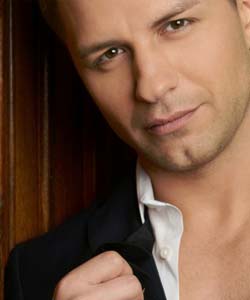 To hear a room full of ladies of a certain age whooping and hollering every time a man in his thirties wiggles his butt in impossibly tight trousers takes a bit of getting used to, but Pasha Kovalev from Strictly Come Dancing’s show, It’s All About You is more than just booty shaking.

Stockport Plaza had a reasonable crowd in attendance for Kovalev’s visit and they were very vocal when the man himself appeared, eventually after a very strange opening sequence with his partner from the 2015 season, Carol Kirkwood attempting to whip us into a frenzy via a video message. This fell flat for me and gave the impression that the budget is tight for this production however when the man himself finally made it to the stage, he didn’t disappoint.

He and his dance partner, Anya Garnis, led a troupe of four dancers through all the moves we would expect, jive, salsa, tango, waltz and freestyle expressive dance. The loose story of boy meets girl gave the show a structure of sorts although eyebrows were raised when the two female dancers stole Pasha from the arms of Anya and proceeded to have a steamy threeway tango! In Stockport? On a Tuesday night???

The huge amount of costume changes (I guess that’s where the budget went) were punctuated by crooner Ricky Rojas who knew exactly the crowd he was playing to with classics such as My Girl, Un Dos Tres and Ain’t No Sunshine although it has to be said, it was a shame he was singing to a backing track with questionable quality, a band would’ve made it come alive far more.

However it was when Kovalev and Garnis were solo that the magic really happened. Carol Kirkwood told us that they have been described as one mind and two bodies in the way they dance with each other and this was so apt. The lifts and routines were breath taking. Garnis is a fantastic dancer and on more than one occasion threatened to steal the limelight from our host. Strictly need to get her back, she would more than fill the gap left by Kristina.

But Pasha wasn’t going to let anyone forget this was his show and why he is one of the most loved of the professional dancers. He had a section where he selected three lucky ladies to dance with him on stage and almost got more than he bargained for as he was manhandled like a piece of meat from our plucky Stockport ladies.

Having been to see a couple of Strictly professional shows, I do have to ask myself if they have enough star quality to sustain a whole show but I think I may be in the minority. In the interval a few people had seen me with my notebook out and guessed I was reviewing it and I was told on pain of death that I had to give a good review, so the Pasha Army is clearly a force to be reckoned with.