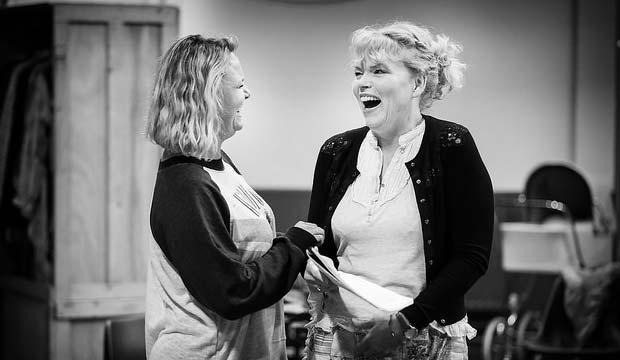 How the Other Half Loves

Alan Ayckbourn is a brilliant playwright, as his body of work works on two levels, many of his plays contain farcical elements and provide plenty of laughs, but he also explores the British class system with real insight and spot on observations.

Some of his work though, is dated, as gender roles have thankfully changed since How the Other Half Loves was first staged in 1969. Viewed as a period piece, this drawing room comedy Is still frantically funny, and cleverly staged, as we follow two couples on a split stage. But, casual domestic violence and women who feel that cooking their wayward men meals, and men who think the house is a tip, does jar, so much so that It becomes difficult to laugh at.

The play is set in the late 1960s and is set in the living rooms of the Fosters (played by Robert Daws and Caroline Langrishe) and the Phillips (Leon Ockenden and Charlie Brooks) and the brilliant staging means their lives are shown in parallel.

Charlie Brooks is excellent as the frustrated wife and mother, Teresa. She is convinced her husband is having an affair and she received no help with their baby. She feels trapped by conventions, and attempts to do more by writing letters to newspapers, in the hope of getting into print.

Fiona Foster, likewise leads an empty life. Richer, in terms of money, but poor in terms of boredom and waiting for something to happen. The two women are linked by their husbands who work together. Robert Daws conveys excellent comic timing throughout, as Frank Foster, and his character has many layers, which he uncovers with ease.

Leon Ockenden is given more to do here, than he currently has in Coronation Street as creepy Will. And his bombastic attitude could be darker, if this was not a comedy.

Sara Crowe and Matthew Cottle steals many scenes, as unwitting pawns, used by both couples to hide/uncover their secrets and lies.

This is a funny play and the audience on the night I attended really enjoyed it. I did, too as Ayckbourn’s writing always has many levels and here, at times it is reliably good. The problem is though, this is no Abigail’s Party. Beneath the surface, the women are expected to please their men, and Mike Leigh’s classic does more with that concept, leaving the audience gasping through the laughter. Here, you are offered a gently amusing drawing room comedy. If that’s your thing, you will love this, if you ignore the questionable gender politics.

How The Other Half Loves is at the Lowry until 16 September.