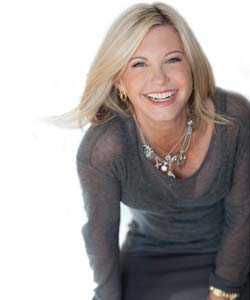 For many of a 'certain age', there have been several constants over the last 35/40 years. The NHS, Queen Elizabeth 11, unfair taxes and of course, Olivia Newton-John.

A packed and very loyal audience at Manchester's O2 Apollo, were treated last night, to something pretty special. Olivia looks  great but then, she always did. She moves well and engages her fans,  but the major treat of the evening was the strength and quality of her voice after so many years. This was first evident with  'Sam' a signature hit from 1977,a song which continues to demonstrate her wide soprano range.

Superbly supported by singers and musicians, Olivia took us on her unique musical journey. From her early days in London's clubs, progressing to her early success with a stream of country hits, Then on to her next stage of success with Hits like 'Magic' and the once banned, (as Olivia proudly pointed out)  'Physical.  'Sandra Dee' 'You’re the One that I Want, 'Summer Nights turned the Apollo into one big karaoke, with Olivia leading us all.
'Her stunning rendition of 'Hopelessly Devoted to You' proved once again, what a truly great voice she has clearly nurtured over the years.

She also reminded us that in 1974, she represented the United Kingdom in the Eurovision Song Contest with the song "Long Live Love". The song was chosen for Newton-John by the British public out of six possible entries. Olivia admitted that she disliked the song. She was placed fourth at the contest held in Brighton behind ABBA's winning "Waterloo". All six Eurovision contestant songs were recorded by Newton-John and included on her Long Live Love album. A nice touch last night was that together with her female backing singe she performed, a version of the song that beat her.' Waterloo'. Humility too it seems.

She chose 'I Honestly love you' , a personal favourite, to finish  As we all streamed out into the cold night air, the buzz continued into the street and beyond. Olivia Newton-John for us is the latest in a number of female singers who appears to just get better with age like Fine Wine or Cheese; take your pick.

She was just wonderful.