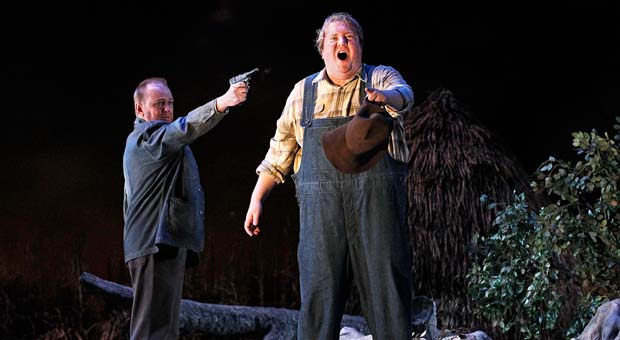 Of Mice and Men

As American Literature, it is no longer really part of the English curriculum. Nevertheless, it is regularly cited in the UK’s top 100 best loved novels. Of Mice And Men has been a frequent target of censors and is included in America’s Most Challenged Books of 21st Century.

Richard Keightley and Matthew Wynn have a convincing chemistry as itinerant workers George and Lennie and they are at the heart of this tragedy, are two dreamers, George Milton and his big ox of a friend, Lennie Small, looking to make a few bucks as a down-payment on a place of their own.

They have been offered work on a Californian ranch after leaving their last town in a hurrySellador’s faithful stage adaptation, at the Opera House, Manchester is an unsettling story but the storytelling never fails to impress. Steinbeck wrote from the heart, and from observation, and a lot of the melodrama was played out right in front of him as he joined migrant workers scratching out a living at farms and ranches during The Great Depression.

The production is very much a slow burner with the story only intermittently coming to life. The second half has more of a powerful punch. The opening of the show is very impressive.

The lumbering Lennie is well played by Matthew Wynn who captures the man’s innocence with the lightest of expressions and simplicity. His dramatic scene with Richard Keightley’s George is shocking and terribly moving

By Dean Thomas-Lowde for Canal St Online. Of Mice and Men with run at the Manchester Opera House until Saturday. Click here now f or tickets.