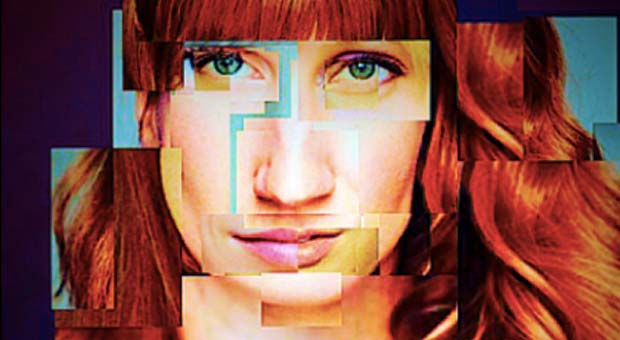 Oct-O-Pus at the King's Arms, Salford

Oct-O-Pus is a relatively short, one-act play by upcoming young writer James Earnest. Set in the present and a slightly dytopian future, it focusses around a young woman, Lisa McDonald, and the events that shaped her teenage life and how it led to where she is in the future, applying for a job as the strangely named Oct-0-Pus company.

As a teenager, Lisa lived with her mum, a nurse, and her nan who works in a kitchen. Attending college to study Business and Baking, she had a steady boyfriend, a fractious relationship with her mother and a better one with her nan. But tragedy leads to a breakdown of the security she hadn't realised she had.

In the future she is attending an interview for a job at Oct-O-Pus, but her interviewer Dorothy is somewhat unconventional. Lisa is pushed to her limits in order to get through the interview process.

Oct-O-Pus isn't the easiest of plays to watch. Lisa's teenage years are full of anger and conflic with her mum and watching the interview process leaves you drained by the erratic nature of Dorothy and what Lisa goes though there. But it is worth the discomfort for the well crafted plot, excellent writing and some stunning performances.

Connor Porter as Nigel is suitably obsequious as Dorothy's underling, and is very good at creating expression as he only signs his lines. Debra Speakman's Nan is a working class woman who takes no nonsense but gives none either. As her daughter and Lisa's Mum Caroline Wagstaffe is very good and effectively shows the changes she goes through as life gets rougher on her.

However the standout performances are Annie Rogers' Lisa and Anna Swan's Dorothy. The latter switches between the uptight, formal and rather maniacal side of her character with a smoothness that is bewitching but ultimately scary to watch. While Annie Rogers is entirely convincing as both the teenage and adult Lisa, giving a superb portrayal in both situations.

Sound effects and the live music is performed by the jazz-punk band Ask My Bull. At times discordant and uncomfortable, other times more evocative, the music is an integral part of the Oct-O-Pus experience.

James Earnest has written a tight, well crafted script which Director Lily Levin has brought to life very effectively. Not an easy night out but one worth dedicating an hour and a half to experiencing.

See whats on at The Kings.