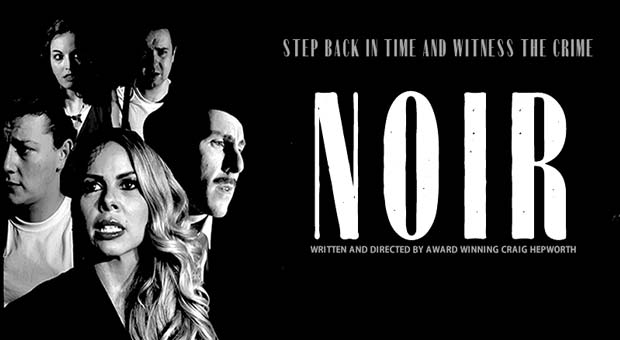 Noir – Vertigo Theatre Productions shown on Stream Back in 2017 Vertigo Theatre Productions produced their original play Noir, bringing the style and feel of Film Noir to the theatre with a stunning representation of the genus. Now after an audio production last year, they have recreated the physical play as a dark and evocative film in a theatrical style. Film Noir was at it's most popular in the 1940s and 1950s, often incorporating a Private Eye or Police Detective, who narrates the plot, moving theatre away from the movies of the 30s and into the darker post war period.

Shot in predominantly black and white, Vertigo have created their own classy Film Noir, which leads you back to the era of Raymond Chandler and Humphrey Bogart. Detective Sal Pelletier is recounting the story of Veronica Smart and the crime that haunts him, even after leaving the force. Veronica is forty, married to Cliff and resentful of the fact that she has never become the Hollywood star she wanted to be. After finding Cliff cheating on her with his secretary, her frustration with her life grows. She starts a job teaching teenagers about art, but pulls three of these impressionable young people, Jimmy, Riff and Vivian, into the more sordid adult world.

She starts her own affair with sixteen year old Jimmy Flynn, and uses his devotion to her to manipulate events. She promises they will go away together but the only thing standing in their way is her husband, Cliff. Eventually she persuades Jimmy to do the one deed that will give her freedom from Cliff. Jimmy enlists the help of his friend Riff, but under pressure Riff tells Cliff of Veronica's plan to kill him and Cliff makes his own propsition. Veronica has also inspired the adoration of 15 year old Vivian Pierce, who begins to model herself on her idol much to the consternation of her mother. What happens between Veronica, Cliff and Jimmy causes Vivian to get her own revenge.

Emma Morgan revisits the role of Veronica as exquisitely as she did when on stage. Beautiful and charismatic, she oozes the charm of Aprodite while employing the manipulation of Hera. Richard Allen is once more in the role of Jimmy Flynn, a character mature for his years but in many ways still so naive. Richard is convincing and magnetic as the young man led astray by the older woman.

The rest of the cast provide excellent performances alongside Emma and Richard. Anna Hickling's Vivian feels like a teenager, while Joe Slack's Riff is troubled and desperate. John Tueart is an umcompromising and unpleasant Cliff, excelling at being the character that you cannot like. However it is Steve Connolly as Detective Sal Pelletier who quietly produces the most mesmerising performance. His quiet but gravelly voice is perfect for the character and evocative of Philip Marlowe, lurking in the background, he watches the story unfold.

Writer/Director Craig Hepworth has made some changes from his original stage play but it is still a superb play. Filmed at the Great Northern Warehouse on phones, and edited by himself and Karl Burge, Vertigo's new production of Noir shows just how it is possible to create an amazing and eminently watchable film during a pandemic when all theatres are closed.

Definitely one to watch.