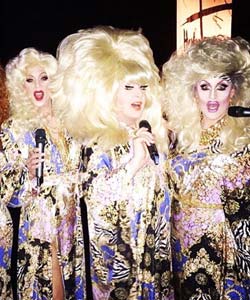 National Treasures at The Palace Theatre

If you're a true drag fan, then this was the show for you! Holy Trannity brought Manchester and London the funniest queens from the USA

Manchester Queen Divina De Campo put a slightly different role to what she's used to. She was on welcoming duties before the show started and still looked as fabulous as ever even though she's been battling with the flu all week... that's our girl!

The show was warmed up by RuPaul's Drag Race Season 6 winner - Bianca Del Rio and the oldest queen in the village, Nana.

Every time Bianca's been to Manchester she's fallen in love with Nana and only felt it was fair that she could show Manchester what a true National Treasure she really is.

Nana had some time to answer some questions from Bianca and then gave us her famous lip-sync to end her part for the night, the continuing to spectate through the evening.

Sherry Vine and Jackie Beat both gave us a side splitting performances of their song parody's that have been shared from YouTube over the years. If you like filthy lyrics and shade then they will definitely give you your money's worth.

You may of heard her name mentioned on RuPaul's Drag Race or even seen Alaska Thunderfuck5000 act as her on Season 5's 'Snatch Game' episode - Lady Bunny.

This queen was not for the faint hearted - she gave us a roaring performance that couldn't have been anymore perfect. Shade, filth, comedy... everyone wanted more from all these queens.

We're honoured that such talent was brought to the UK by Holy Trannity. These National Treasures really did put on an amazing show, worth every penny.

Bianca revealed that she's considered moving to Manchester if the controversial Donald Trump is elected president... we'd gladly have her here any day!

We'd like to thank everyone that played a part in making this show the show it was.

Can we have a second tour?