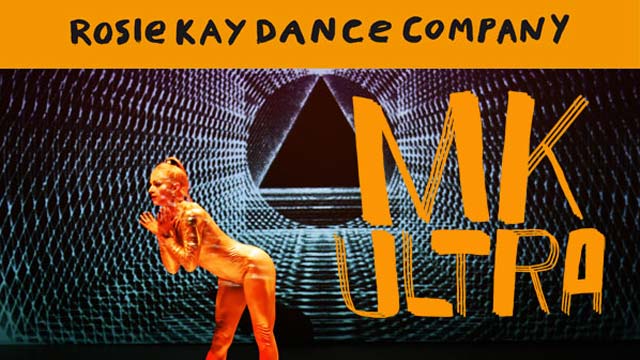 “I can’t be immune to dance because I love Strictly but I don’t really know what’s going on”, so spoke my friend in the interval of MK Ultra by the Rosie Kay Dance Company and it echoed my thoughts. I’m not an expert in contemporary dance so am probably not really qualified to review it but from an extremely lay person’s point of view, all the parts were there but I didn’t feel that they gelled together all that well.

In what was a master stroke for Kay, she timed the production MK Ultra, an examination of the conspiracy theories of the illuminati, perfectly with these crazy modern times of alternative facts and post truths.  The opening graphics proclaim “This is fake theatre”, setting the scene defiantly.

MK Ultra refers to a mind control technique, allegedly adopted by the CIA in the 1950s and 60s. The conspiracy theory that this production focuses on is one that the CIA aligned with Disney to create controllable public figures to spread their messages to society.

This was portrayed through videos by Adam Curtis, a filmmaker who’s HyperNormalisation and Bitter Lake you may have seen through iPlayer.

Backed with a dance soundtrack created by Annie Mahtani including potential illuminati subjects such as Britney, seven dancers interpreted the struggle faced by those who lie victim of the illuminati as they look to create a new world order.

The cast of this production are very good with the stand out star being Shelley Eva Haden who is wonderful to watch. What I found interesting was that the choreography for the whole production was incredibly tight however each performer clearly stamped their own identity onto the dance, making each one slightly different, treading just the right side though to ensure a cohesive experience for the audience. This gave off a reality TV competition of sort, each candidate battling for supremacy, working carefully within a structure but trying to stand out, which one character finally does and the throne in the corner becomes used.

The only real issue I had as an audience member was tying these all together and understanding the story. I probably should have done some reading up before I attended and I would have had a much better experience as having read up since, it has made things seem much more clearer.

This didn’t detract from enjoying a night at HOME for another groundbreaking performance that the venue is becoming well known for.  Whether you subscribe to the conspiracy theory or not, it is an important and compelling production that leaves you questioning whether we are all just being controlled after all.