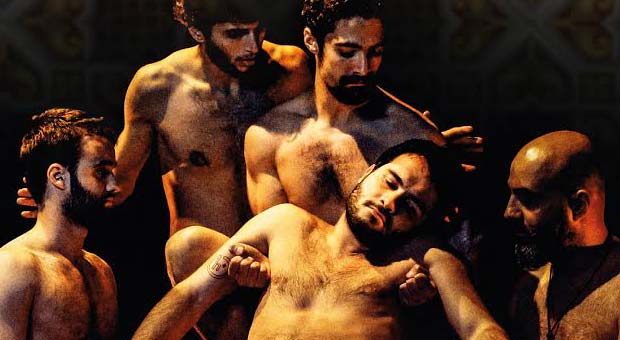 Tomorrow I will start shouldering your responsibility, but right now I'm in a hurry”, is what Hassane, an unemployed young man from an impoverished neighbourhood in Beirut, declares to his mother following a family argument about his lack of drive and success. As he heads down to spend time at the beach with his friends shortly after, everyone’s lives are upended after an innocent endeavour goes awry, sending shockwaves through the community and changing their lives irrevocably. This is the story of Martyr, an award-winning film by Mazen Khaled which explores the complexities of grief, life, youth, friendship, and love against the backdrop of a city that hums with its own pain and longing.

The genre-bending direction from Khaled shakes off the constraints of conventional cinema, utilising movement and silence that feels more like visual poetry, with beautiful shots that linger on the body, and those brief touches that have you questioning whether there is more to the characters than meets the eye. Despite the heavy themes at the core of the story, what stands out the most in this film is the sensuality of its subjects, though Khaled wasn’t necessarily alluding to homosexuality or queerness between the four male friends, telling Filmmaker Magazine, “Funnily enough, in Lebanon, it wasn’t taken with a strictly gay interpretation.

Even in the Arab world at large, it’s being perceived as something else. It’s being perceived more as a friendship. But over here in the west, I don’t think we can look at tenderness between men without their minds going immediately to homosexuality.” Whether reflecting, socialising, or grieving, the young men who carry both the film and its protagonist (literally) make everything feel sensual, furthering enriching the meditative nature of the world, and encouraging us to reflect on our lives not only as individuals but as members of families, friendship circles, communities, and more.

It is certainly refreshing for a film to celebrate intimacy that isn’t specifically romantic between men, no matter the darker overtones of the narrative, and most importantly, there is always power in a film that serves as a humbling reminder that tomorrow is never promised. Martyr is a Peccadillo Pictures release, premiering on Curzon Home Cinema on March 12th, followed by a release on DVD and all other digital platforms from March 22nd.