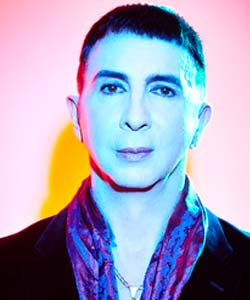 Marc Almond at The Bridgewater Hall

The Velvet Trail, (Title track from his new album) Almond explained is a ‘wild and romantic’ walk that’s signposted through the dunes of his beloved Southport. Wild and romantic pretty much sums up his performance, energetic and dramatic, a tiny puck like figure head to toe in black.

You don’t need to know his songs to enjoy the gig or feel involved immediately with the music. Each song is a story and he takes you with him, not just singing but performing each song somewhere between opera musical theatre and pop. The almost 2 hour set was made up of songs from The Velvet Trail and with plenty of crowd pleasers thrown in.

He quipped, "I can barely make it around the stage these days, especially in these heels" but the truth belied that, he was full of energy running back and forth throughout, waving to the gods and gesturing with every lyric.

He joked that his ageing audience should be careful about taking their pensions out in a lump sum lest they be taxed heavily, before dramatically launching into the next song. Yes his audience are ageing with him, but up in the gallery they were dancing in the isles and Almonds voice and energy is more powerful than ever.

By the end all 4 tiers of the packed Bridgewater hall were on their feet to chorus together, with feeling, 'take your hands off me, I don't belong to you, you see'. It was hard not to be moved, leaving the venue there were a lot of red eyes and happy faces. Marc Almond is nothing short of a legend.