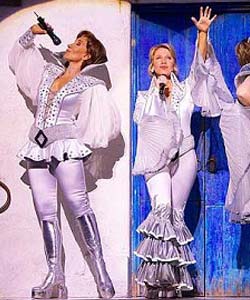 What a gorgeous romp! There's very little to cavil at (a little more pace in the opening scene for the older male trio? Picky! Pedantic!) this bouncy, fabulous production: a standing ovation works for me. Also my face ached from laughing and smiling by the interval.

If you want deep thought and introspective reflection, go elsewhere. There are touching and even moving moments, but if you like a fun, fantastic evening filled with laughter and music and - because they know their demographic - delicious amounts of lithe dancers (male and female, though it's boys who go topless) to delight the eye, Mamma Mia is for you.

Simple, clever scenery; evocative lighting and legendary music make this a wonderful evening. Plus a talented, enthusiastic cast who seem to be enjoying themselves almost as much as their audience.

It's wrong, in a way, to pick favourites from among such a strong ensemble, but Sara Poyser, Jacqueline Braun and Emma Clifford are particularly marvellous as Donna & The Dynamos. All of Poyser's numbers are strong and get much well deserved applause; Braun and Clifford have one major song each, and both stand out - hilarious. And Louis Stockwell, as Pepper, the young man who likes his women....er...mature bounces off the wonderful Clifford brilliantly. Lucy May Barker's voice is beautiful, too. The muscly pecs and rippling abs on.....I'm so sorry: I forgot you were there.

In the vagaries of a Manchester spring, a night at theatre is perhaps not the same as two weeks in the Mediterranean. Mamma Mia gives it a close run though.  My face aches from smiling, laughing, singing along and yelling huzzah. "Huzzah!"

If you want theatre that examines the human condition, go find Brecht (or something - that could be wrong).

If you want a bloody good night out, check out the Palace for Mamma Mia: a theatre packed with people on their feet, shouting and singing the songs of Abba. Fun!