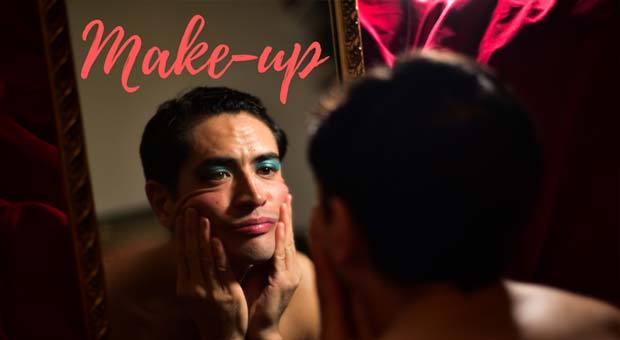 Make-up is on for a short run at the King’s Arms in Salford as part of Manchester Fringe. It’s a solitary glimpse into the non-performing side of drag. For those with long memories “The tears of a clown” would be a good introduction, but that doesn’t do the performance justice. Things open with Lady Christina (aka Chris, performed by Moj Taylor) leaving the stage at yet another indifferent venue, and dressing down before going home.

I’m sure a lot of men will recognise that on looking in a mirror they’ve somehow morphed into their father (as a 66 year old reviewer I see this daily) and the remainder of the performance is essentially a monologue with his estranged parent. It’s done very well.

The narrative takes us through some painful times in Chris’s life covering the total rejection by his father, the painful demise of his mother to cancer, and the on/off skirmishes with his peers. Also discussed is his relationship with his alter ego Lady Christina – can one survive without the other? We start with Lady Christina in full costume and by slow degrees she becomes Chris again.

The playwright, Andy Moseley, who was there on the day, indicated that growing up in Oldham was a major part of the creation of the play. As someone who also grew up in Oldham and experienced the same rejections (“No son of mine”, “Backs to the wall” etc) from father and peers alike I was taken back to the mid 70’s when being different (as the parlance had it then) was dangerous.

But, back to the play: It’s a fantastic performance. It’s not an easy one but, thank God, Chris and Lady Christina will endure. And just when you think Chris has thrown in the towel, a little bit more make up is applied and Lady Christina lives to fight another day.