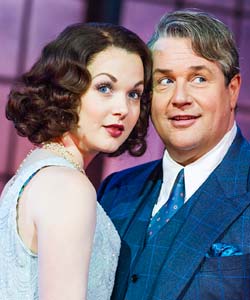 Mack and Mabel is a musical with a book by Michael Stewart  music and lyrics by Jerry Herman. First performed on October 6th 1974, the plot involves the tumultuous romantic relationship between Hollywood director Mack Sennett and Mabel Normand, who became one of his biggest stars .The latest production Starring multi award winning Michael Ball and the lesser known American all-rounder Rebecca LaChance landed this week at The Opera House Manchester.

In my experience it is quite rare to sit through a musical that is crammed full of great and memorable songs. Mack and Mabel is one such show.

"Movies Were Movies", "Look What Happened to Mabel" and "Big Time" not only helped tell the story of how an unknown Mabel Normand became a huge star of the American stage under the guidance of the ebullient Mack Sennett but did so with such pizzazz. The staging is terrific too with the clever use of modern technology in the style of the era, providing some stunning visual affects which complemented the performances beautifully.

Mack's honest rendition of "I Won't Send Roses" (famously used in a routine by Torville and Dean) and the entire cast's "Hundreds of Girls" sends me and my companion off to the bar on a real high.

The second act opens with the return of Mabel to the old gang, having been wooed away by Mack's rival William Desmond Taylor, with the resounding "When Mabel Comes in the Room".

As the sub plot progresses with Mabel's downfall into a world of drugs and alcohol and the realisation that she and Mack are, somehow, destined to be together, we were treated to, the heart-felt "Time Heals Everything".

"I Promise You a Happy Ending" brings us full circle in terms of this long term love affair, without either of them actually saying the ‘three little words.’

As to performances, Ms LeChance's Mabel is a great mix of sweet, funny and kind, as well as being strong and fiercely independent, albeit, ultimately, flawed.

Michael Ball demonstrates a honed acting performance following decades of being largely regarded as just a great singer. They both complement each other’s characters with the ebbs and flows of this story.

Hi praise too for a strong and hard- working ensemble cast. Also, notable performances from the versatile Jack Edwards and Gunar Cauthery as Frank and Anna-Jane Casey with the show stopping 'Tap Your Troubles Away'.

If there was a problem with the night, it was simply that we weren’t sure which of the great songs to hum as we reluctantly spilled into the chilly, Manchester streets.