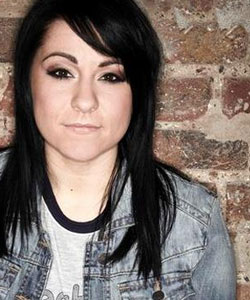 I’ve seen Lucy Spraggan a few times at Manchester Pride so I’m well aware of her ability to enchant a crowd. Naturally, you’d expect this charm to be magnified amongst a crowd of her own at the sold-out O2 Ritz on Saturday night, but wowsers. From the moment she stepped on stage through to her confetti fuelled finale, she was joined by a dedicated crowd who accompanied every single word she sang. Maybe it was the acoustics of the venue but the magnitude of the humming singathon was quite striking. No doubt it helped whip the crowd further to hear Spraggan declare that Manchester has been the gig she’s been looking forward to most.

Showcasing her latest album I Hope You Don’t Mind Me Writing with a generous splattering of fan-favourite oldies, it was a jolly fun affair with a surprisingly mixed crowd. Of course there was a huge lesbian contingent, but it was right nice to see a healthy glug of men and even children getting in on the action. There was even the obligatory onstage marriage proposal between two fans thrown in for good measure. Heartwarming stuff hey?

It’s a testament to Spraggan’s ability to resonate with her audience that is clearly core to her success. Whether she’s singing about getting hammered on her career launching Last Night (Beer Fear), or her nostalgic ditty, Freddos Aren't 10p (who hasn’t raged about the cost of Freddos?), the audience were with her every step of the way. Of course, there were plenty of her trademark set-up stories to many of her songs. Having seen her perform before, I think it’s the third time I’ve heard the story about the man in the blues club who inspired the song Don’t Know Anything About The Blues, but strangely, it doesn’t seem to lose it’s charm.

You can’t help but like Lucy Spraggan and what I found most interesting as someone who isn’t a die-hard fan, is that on several occasions I scanned the crowd and people were absolutely beaming. It’s clear she knows her brand, in a very genuine way, by exuding the sense that she’s one of us. Much in the same way Ed Sheeran has that down-to-earth, ‘guy down the pub’ vibe (albeit with wads of cash nowadays), Spraggan feels like the female equivalent but with much less critical success. Unfortunately.

This is quite the intriguing thing about Lucy Spraggan; she’s achieved much of this off her own back. Of course there was the initial springboard of certain TV talent show but the fact that she’s maintained and built a career which sells out tours and can reach number 12 in the UK album chart with little to none radio play, is testament to her appeal. In a world where LGBT women are largely ignored, Lucy Spraggan demonstrates there’s an untapped audience of fiercely loyal fans and if you ask me, the media industry at large are missing a massive trick here.

Pay attention radio people, because if the crowd who attended the Ritz last night are anything to go by, Lucy Spraggan is not going away anytime soon.