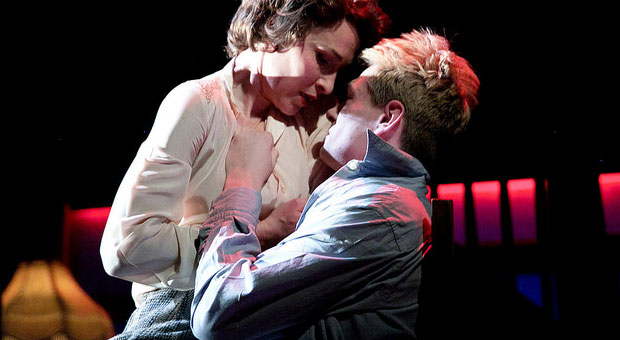 Love from a stranger

A young woman wins a large amount of money in a sweepstake, decides to head on a journey of adventure and encounters a stranger in the process of letting out her old apartment - so begins two hours of suspense in the Lowry’s latest offering. Love from a Stranger is based on Agatha Christie’s short story Philomel Cottage, which she adapted into a stage play, and Frank Vosper built this further into a 1930’s West End run.

Directed by Lucy Bailey, The Fiery Angel and Royal & Derngate Northampton production moves the action to the 1950s. Clever design by Mike Britton, Oliver Fenwick’s lighting and Richard Hammarton’s sound add to the tension, as we move between rooms. The cast is led in suitably melodramatic style by Helen Bradbury, as sweepstake winner Cecily Harrington, and Sam Frenchum as the mysterious stranger Bruce Lovell. Nicola Sanderson is suitably Hyacinth Bucket as Aunt Louise.

Unusually for a thriller, we know the villain and their motive from the start. From the moment Lovell lewdly sniffs Cecily’s undergarments it is clear what he is after – the suspense is in how he’s going to get there.

Take a break from the stress of football and enjoy the suspenseful frivolity of an Agatha Christie with a twist.