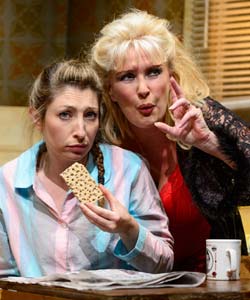 Beverley Callard is a loud, vulgar, brash, selfish, good time girl and a bad mother to boot. Fortunately, this is only during her performance as Mari in 'The Rise and Fall of Little voice'.

A packed Opera House were initially made to feel as if they were in a working men's club. There was a raffle and bingo. These, along with terrible, corny, jokes from Mr Boo (who was very well played by Duggie Brown of the 70's show, 'The Comedians') helped create the right atmosphere for the night ahead.

Then there was shy, reclusive, Little Voice. L. V., brilliantly played by Jess Robinson, is the antithesis of her mother. Living, mostly, in her bedroom, with her dead father's record set for company, she learns to mimic his favorite recording artists.

Along comes, Ray Say. Ray, played by Simon Thorpe is a small-time promoter. He hears L. V. during an overnight with Mari. He eventually persuades L. V. to perform at the club, believing that she is the one act that he has been looking for, forever.

What happens next?  Well, go and see. You won't be disappointed. The show is very funny, mostly thanks to the fabulous comic timing of Ms. Callard which is helped along nicely by her gormless friend, Sadie, beautifully played by Sally Plumb

A great night out but the bad language might not make it your cup of tea. I, however, loved it.

The show runs at The Opera House until Sat. Details here.